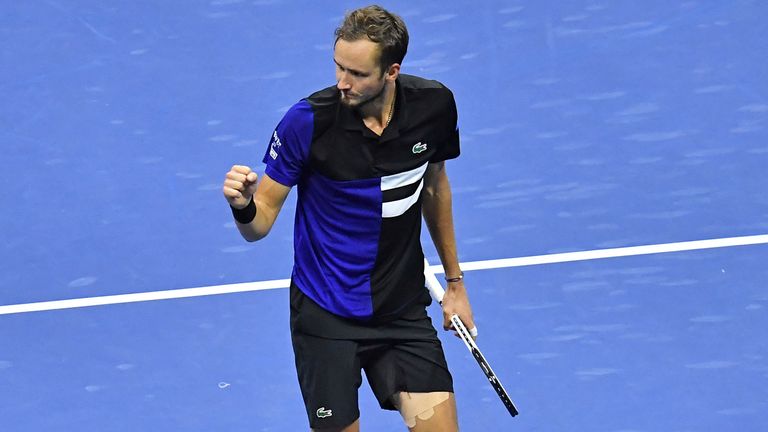 Daniil Medvedev did not need the points from Sunday’s triumph in Marseille to replace Rafael Nadal as world number two but the Russian said it was a great feeling to claim a 10th ATP title as he climbed another rung on the ladder.

Medvedev’s rise up the rankings was confirmed earlier this month with Nadal not playing tournaments since the Australian Open to recover from a back injury but it was rubberstamped with Monday’s release of the official rankings.

Last week Novak Djokovic broke Roger Federer’s record for the most weeks as world no 1, and now Medvedev has become the first player outside Roger Federer, Novak Djokovic, Andy Murray and Nadal to be ranked in the top two since Lleyton Hewitt in July 2005.

It was a double celebration for the Russian, runner-up to Djokovic in the Australian Open last month, as he claimed his first individual title of the season on Sunday night with 6-4 6-7(4) 6-4 victory against unseeded Frenchman Pierre-Hugues Herbert at the Open 13 in Marseille.

A magnificent achievement for @DaniilMedwed 👏

For the first time since July 2005, a man not named Federer, Nadal, Djokovic or Murray is in the top two of the @FedEx ATP Rankings. pic.twitter.com/tdmZwxxcur

“I knew that I would become No.2 no matter what on Monday, it is always better when you step up the rankings when you do something great,” Medvedev said.

“I know that winning here didn’t give me the points to become No.2, but it is great for the self-esteem that just before becoming No.2 on Monday, I win a tournament.”

Medvedev reached the Australian Open final last month, his second Grand Slam decider after the 2019 US Open, on the back of a 20-match winning streak through the Paris Masters, ATP Finals and team-based ATP Cup that included 12 straight wins over top-10 opponents.

His run ended with defeat to Djokovic before he suffered a shock loss to Serbian Dusan Lajovic at Rotterdam.

After that blip, however, Medvedev was back to winnings ways in Marseille where he picked up his 10th Tour title – all on hardcourts.

“I am really happy about the number 10. It gets me to two digits, something which I dreamt of when I was a kid,” said Medvedev.

“I think it is already a great number, but I am going to try to work more and get some more … I really like to play on hard courts. I feel like that is where my game suits me the best.”

After Nikoloz Basilashvili claimed the Qatar Open on Saturday, the week’s ATP winners were completed on Sunday evening in South America where Chile’s Cristian Garin won the Chile Open with a 6-4 6-7 (3) 7-5 victory over Argentina’s Facundo Bagnis in Santiago.

The top-seeded world number 22, claiming his fifth ATP Tour trophy, is the first Chilean player to win at a home event in 12 years.

Kyrgios hits out at ‘tool’ Djokovic