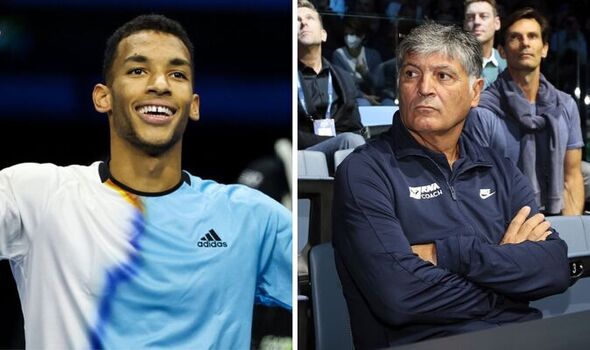 Felix Auger-Aliassime admitted his first-ever win over Rafael Nadal was made extra special by having the Spaniard’s uncle Toni in his box. The world No 6 has been coached by Toni since 2021 and earned his maiden ATP Finals win on Tuesday as he downed the top seed 6-3 6-4 while the 61-year-old watched on from his player box.

Auger-Aliassime earned his first victory over Nadal in three meetings on Tuesday, needing less than two hours to also secure what was his maiden victory at the ATP Finals. The match also had a unique aspect with Nadal’s former coach and uncle Toni sitting in the Canadian’s box and cheering against his nephew as the current coach of the 22-year-old.

When the world No 6 faced Nadal at the French Open earlier this year, Toni famously opted not to attend the match despite sitting in Auger-Aliassime’s box for his previous matches but this time around the 61-year-old confirmed that he would remain in the Canadian’s support camp and stayed true to his word as he sat in the fifth seed’s box and watched his charge defeat his nephew.

After the match, Auger-Aliassime confessed that the win was all the more special with Toni’s support as he shared his admiration for the Nadal family. “I’ll try to use the experience of Toni in these situations,” the Canadian said, discussing his hopes of making it out of the group stage at the ATP Finals.

JUST IN: WTA would ‘welcome’ talks to host Finals in UK – EXCLUSIVE

and then we’re all normal outside of the court.” The 22-year-old also explained what it felt like to finally defeat Nadal after idolising him as a child and was quick to praise the 91-time title winner for continuing to battle with the younger players despite his recent losses.

Asked what his younger self would think of the 6-3 6-4 win he said: “He’d think it’s really cool, I don’t think he would believe it really. I don’t know if it’s because I wasn’t sure if I’d be here one day.

“The age difference is huge and it just proves an example because he’s still here at 36, still battling guys in their 20s, having full energy, moving well and serving big. So he’s a great champion and it’s a great attitude, so he’s still a great example, not just when I was a kid.”

After losing his opening match to Casper Ruud, the Canadian is hoping he still has a chance to make it out of the group stage and reach the semi-final on his debut at the ATP Finals. And Auger-Aliassime is taking extra confidence after beating Nadal for the first time.

“When I’m playing like this I’ve proven to myself that I can compete and beat some of the best players in the world,” he said after the match. “Of court that’s what’s great, I’m one win, one loss now but if I can get two wins in that group hopefully I can get through.

“Let’s see how it goes, they’ll play it out tonight and I’ll be waiting of course for Taylor in two days. It won’t be easy, he’s been playing really good this year, I think these conditions are perfect for him so that’s going to be tough.”

Murray makes confession about ‘keeping up’ despite ruling out retiring