Aslan Karatsev’s unprecedented debut grand slam run has ended at the hands of Novak Djokovic, the Australian Open-winning machine advancing to his ninth final at Melbourne Park, having won each of his previous eight tournament deciders.

The Serbian beat Karatsev in straight sets 6-3, 6-4, 6-2 at Rod Laver Arena on Thursday night to set up a clash with either Greece’s Stefanos Tsitsipas or Russia’s Daniil Medvedev in Sunday evening’s final. 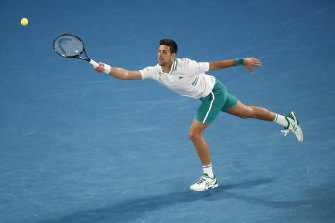 Novak Djokovic proved too good for Aslan Karatsev in their semi-final on Thursday night.Credit:Getty Images

Karatsev, the 27-year-old Russian qualifier in his first grand slam, will go from world No.114 into the top 50 because of his breakout effort, which included wins over No.8 seed Diego Schwartzman, No.18 seed Grigor Dimitrov and No.20 seed Felix Auger Aliassime.

In the two latter matches Karatsev came from two sets to love and one set to love down to win.

It is not quite the dream semi-final that old-school, tantrum-loving fans had been hoping for. That would have been Nick Kyrgios v Novak Djokovic. But Friday night’s meeting between Daniil Medvedev and Stefanos Tsitsipas should still add much-needed pepper to our staple diet of forehands and backhands.

Tsitsipas and Medvedev started eyeballing each other during a meeting in Miami, almost three years ago. They have never really stopped. Perhaps it is not quite on the level of Jimmy Connors leaping over the net to poke his index finger into John McEnroe’s face. But unlike most modern tennis feuds – which are usually resolved for the benefit of sponsors – this one is still bubbling away.

When Tsitsipas finally defeated Medvedev for the first time, during the 2019 ATP Finals, he was asked if their mutual tension brought any extra satisfaction to the victory.

“It means more than extra,” Tsitsipas replied, almost purring with delight. “It’s a victory that I craved for a long time now … our chemistry definitely isn’t the best that you can find on the tour. It’s not that I hate him [but] we will not go to dinner together.”

G’day everyone! It’s Roy Ward here and I’m in tapping the keys for tonight’s men’s semifinal between Daniil Medvedev and Stefanos Tsitsipas which is due to start sometime after 7.30pm AEDT.

We will also have some coverage on today’s Australian Open developments and more in the hours to come so please stay with us and don’t hesitate to leave a comment on the blog.

Please enjoy the evening to come.

ATP Finals 2020: Why isn’t Roger Federer at the ATP Finals in London?

Judy Murray believes Scottish tennis 'should be a lot further on'