Do spare a kind thought for that peculiar being, the tennis tournament director. In normal times, he walks around inundated but unacknowledged. Thousands fill grandstands without comprehending his existence.

Well, in pandemic times in Australia, which treats the coronavirus seriously, he walks around inundated piled atop inundated, a cascading inundation. His public remarks lure interest far wider than accustomed. He speaks of health officials and the premier of the state of Victoria. He sleeps in brief bursts if at all, which does sound familiar in the case of Craig Tiley, the Australian Open director whose three-country CV shines with this curious distinction:

He’s among the best coaches in the history of American college sports. 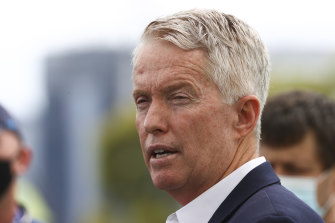 That’s how, amid all the fears and doubts and complaints and hotel quarantines around holding the 2021 Australian Open from Monday to February 21, a 36-year-old player could make a keen observation on Zoom. The player was American Rajeev Ram, whose previous treks through the Australian Open in 2020 and 2019 took on the happy hardware of men’s doubles and mixed doubles titles. As Tiley met with players a few weeks back over video, hearing their tales and wails from their hotel rooms, Ram could spot something in a face he has known just more than half of his life, that of Tiley, his coach on the storied 2003 team at Illinois.

“The third [call],” Ram said from Australia, “he just looked like he was just having a tough go of it.” So: “I wrote him: ‘Just hang in there, man. I can’t imagine what this is like.’ He was like, ‘I’ve worked 54 hours straight.’”

“Doesn’t surprise me,” said Amer Delic, who won the 2003 NCAA men’s singles title at Illinois while treasuring even more the team title of that same springtime. “We called him a vampire in college. He pretty much slept in two- or three-hour shifts. It’s like his brain is constantly working. It’s like it doesn’t need the rest. It just needs a quick, Tesla-style plug-in to work.”

“I am shocked that they’re allowing the Australian Open to happen,” said Dallas-based investment manager Chris Martin, who clinched the team title for Illinois in 2003. “But I’ll tell you this, and I’m sure many people will tell you this: If there’s anybody that can pull it off, it’s Craig. You just know he had thought of every angle and every contingency plan.”

If former athletes speak of former coaches with spite or indifference or gratefulness or love, mark this one down as big love. “My ears perk up whenever I have a chance to talk about him,” Martin said. And: “Anytime I can talk about Craig to someone who doesn’t know him is joy for me”. And: “It seems wherever he goes he leaves an indelible impression”.

In the early 1990s in the tennis afterthought of Champaign, Illinois, athletic director Ron Guenther, that old Illini offensive lineman, hired Tiley to run a tennis centre, then as interim tennis coach, then as actual tennis coach. Here was a sport with a hell of a hegemony: Forty-two of the 43 titles from 1960 to 2002 went to Stanford (17), Southern California (11½), UCLA (9½) or Georgia (four). Opposing coaches wishing to dissuade prodigies from attending Illinois easily could sneer at cold weather, charmless indoor courts, traditionless tradition or flatland that can give the sense of a place one would film a movie about a tornado.

It’s one of the biggest whoas ever in college sports, with a pinnacle on May 20, 2003, in Athens, Georgia, when Illinois and Vanderbilt stood 3-3 pending Martin’s match. He served for that match at 6-4, 4-6, 5-4, went down the love-40 chasm, found deuce, lapsed into a fourth break point, ticked a forehand volley into the net on one championship point and creamed a forehand volley on another, then went to exult, then saw his opponent call it out, then heard the umpire overrule, then had assistant Bruce Berque come leaping into his arms.

Somehow, players drawn to Illinois for the power of Tiley’s personality – Delic had thought the school must be in Chicago after emigrating at 13 from Bosnia to Jacksonville – had snared themselves a memory for good. “Oh my God,” said Delic, who reached an impressive No.60 in the world and the 2009 Australian Open third round. “People ask me: ‘What is your best tennis experience? Playing on Arthur Ashe at night? Or Rod Laver?’ And I always go back to winning the NCAA title, the team title.”

It’s a story of tennis coaching transcending tennis coaching to the utmost element of all coaching: humanity. So they remember the meticulous scripting of practices and the thank-you cards Tiley asked them to sign on the way back from road trips for host families, tournament officials and the like. They remember agreeing to wear the same thing on road trips – khakis, collared shirts – as a statement of team that stemmed from “planning, not from ordering,” as Delic put it. They remember they could call Tiley “even at 9:30pm on a Tuesday” and find a “best friend,” as Martin put it. They remember “world-class people skills,” as Ram put it.

“I was hearing about this guy from Champaign, Illinois, Craig Tiley; knew a little about his Davis Cup background,” Delic said. “What really intrigued me about him was just during the visit you could see he was an incredible players’ coach. He’s one of us, but he has authority. He’s not a pushover, but he’s not a drill sergeant.”

“Even when we were on his team and playing for him, to me it was so evident that he was operating on such a higher level than anyone else in the country,” Martin said. “There was almost an aura about him. I almost got the feeling, and I think I kind of felt that at the time, that there was no question he was destined for bigger and better things.”

“His absolute strength comes, in my opinion, [in making] everybody feel like they were the most important on the team,” Ram said.

Come 2005, he joined Tennis Australia as director of player development, creating the rare scenario by which for the 2006 Australian Open, Delic could play the event and stay at his old college coach’s apartment. Fifteen years after that, Tiley mans a position both lofty and unenviable, a position that transcends tennis and all of sports. Can the world pull off such a thing at such a time?

Another snag came last week. A 26-year-old support officer from the Australian Open hotel quarantine program tested positive, breaking a 28-day streak without local positive tests in Victoria. The prep tournaments on the Australian Open grounds took a one-day pause. There went Tiley in front of the microphone and in front of his third country in life and into language now familiar but once unimaginable.

He had to reiterate the grand slam would begin Monday. He had to note the 507 tests of those visitors quarantined from January 16 to 29, including 160 players. “The entire team has been up all night dealing with this, and I’m incredibly proud of the work they’ve done,” he said. “But this is about now making sure everyone gets tested. We’re purely focused on that.”

It’s more than a lot, but he does have those rooting for him even from afar, the way he once rooted for them right up close.