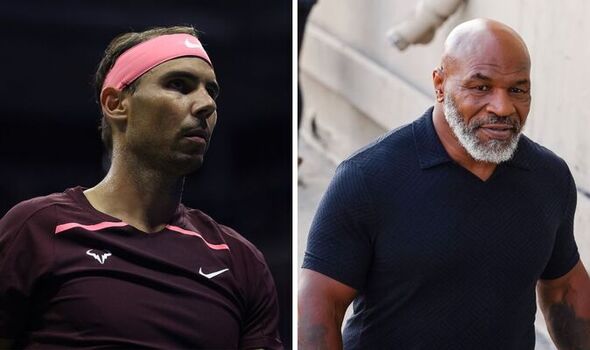 Rafael Nadal has been snubbed for Roger Federer and Novak Djokovic as Mike Tyson gave a brutal review of the Spaniard’s game. The boxing legend recently appeared on Jimmy Connors’ podcast and explained why he didn’t enjoy watching the world No 2 in comparison to his Big Three rivals.

Nadal has spent his career being compared to Federer and Djokovic, and this year finally managed to surpass his rivals by breaking the record for most Grand Slam singles titles won by a man, holding 22 to his name. But the 36-year-old still fails to live up to his fellow Big Three members in the eyes of Mike Tyson, who had a brutal review of the Spaniard’s playing style.

The boxing legend has long been a supporter of Djokovic, and during his recent appearance on the Advantage Connors podcast he told retired legend Jimmy Connors that he now preferred to watch Federer, despite the 41-year-old’s recent retirement. “Djokovic, definitely, and Federer. Talking about Djokovic, he came back from all those injuries,” he said of the world No 7.

“You know, I love Djokovic personally but I’m just a big fan of Federer. When he was in his prime, he was always moving in the air. He’s smooth. He’s really smooth.” But the 56-year-old was less than impressed with Nadal’s game, despite thinking the world No 2 was still a good player.

He added: “Nadal was just all over the place. He’s a great player, but he doesn’t look great playing. Federer is smooth and very elegant.” Tyson had previously lauded praise on Djokovic for his ability to return to his top level after injuries.

Speaking in 2020, he said: “Novak Djokovic is my favourite at the moment. If he is okay, I really like to watch him. He is my favourite because the way he has come back from injury and beaten guys like Nadal and Federer is amazing. He’s a true fighter.”

As well as becoming something of a Federer fan in the two years since, Tyson also hailed Coco Gauff, who now sits at No 7 in the world after an impressive season that has seen her reach her first Grand Slam final at the French Open and make her top ten debut at the age of just 18. “I think she’s amazing,” he said.

“She has something that most don’t have and that’s time. She has a lot of time to cultivate her skill to become a lot better. And that’s what she has that I find most of the players don’t at this time.”

Emma Raducanu prize money: How much has British Wimbledon sensation won in her career?

French Open 2020: Spectators to be allowed despite increase in coronavirus cases

The Breust of times: Why Hawthorn’s goal-kicking machine stayed

Where to watch the Socceroos play Argentina on Sunday in Sydney