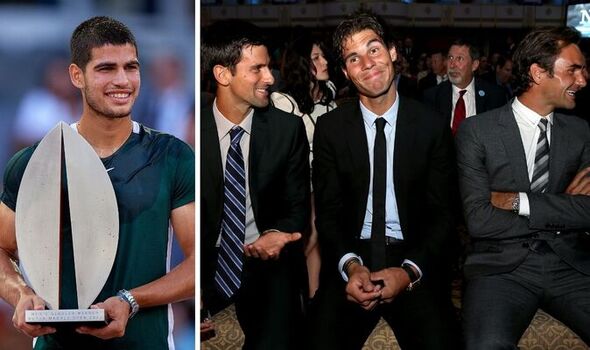 Carlos Alcaraz has revealed what traits he’d steal from each of the Big Three. The 19-year-old became the first man ever to beat Novak Djokovic and Rafael Nadal back-to-back on a clay court in Madrid last week and has now shared what he believes to be the best elements of their respective games.

Alcaraz managed to get his first win over Nadal in three attempts in last week’s Madrid Open quarter-final, and followed it up with a victory over Djokovic in their first career meeting. Federer now remains the only member of the Big Three he is yet to face while the 40-year-old continues to recover from a third knee surgery.

But the five-time title winner still knows what aspects of Federer’s game he’d love to possess as he was recently asked what elements he would steal from each of the Big Three. “I think Rafa would steal his fighting spirit, never giving up, never giving up a ball, sacrificing himself, working hard,” he told La Nacion.

“If I have to train three hours, I train three hours at 200 per cent intensity.” Explaining what he’d like to possess from Djokovic and Federer’s games, he added: “To Federer, the elegance, the variety of strokes and tennis that he can display in a match. And to Djokovic the elasticity and the physique that he has.”

JUST IN: Nadal secretive over ATP’s Wimbledon meeting – ‘Not good to go public’

The world No 6 may not need to take anything from Nadal though, as he has continuously been compared to his fellow Spaniard throughout his career, prompting the man himself to demand the comparisons stop so Alcaraz can enjoy his own success. “The only thing we can do is enjoy the career of an amazing player like Carlos and it will be better, even if it’s interesting, that you stop comparing him to me,” he told reporters in Rome.

And it seems there’s also more about Djokovic’s game that the recently-crowned Madrid champion admires, as he noted how difficult it was to deal with the world No 1’s serve during their first meeting despite the Serb being known for his solid return. “Djokovic is not considered a great server, but, for me, he has been the player who has made it the most difficult for me to return his service,” he told Marca after lifting the title.

“I couldn’t read his directions of the serve and that’s what impressed me the most. Apart from the great level that he has from the back of the court, it’s one thing to see him on TV and another to have him in front of you.”

And the world No 1 was also complimentary of the teenager, branding him the world’s current best player. “He definitely is special. Already he’s breaking a lot of records as a teenager, winning two Masters events this year, a couple of [ATP] 500s,” Djokovic said. “So far he’s the best player in the world, no question, this year. The way he was dealing with the pressure. I mean, in our match a few days ago, how calm he was all the way, was impressive. He deserved to win the trophy.”