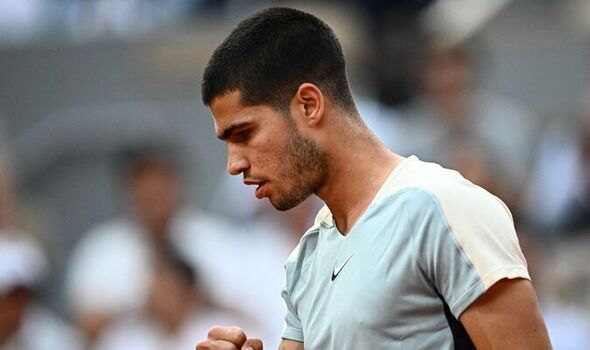 Carlos Alcaraz got off to a perfect start at the French Open with a 6-4, 6-2, 6-0 win over Juan Ignacio Londero in the first round.

Alcaraz is widely considered to be one of the favourites to win the tournament and began with a straight-sets victory over Londero. Fresh from his stunning Madrid Open victory earlier this month which saw him beat both Rafael Nadal and Novak Djokovic on his way to final, Alcaraz is gunning for his first Grand Slam singles title.

And the 19-year-old laid down a marker against Londero, who put up a spirited fight early on before fading against a dominant Alcaraz. It took the Spaniard 40 minutes to win the first set as Londero battled hard, but his quality shone through as the match wore on, with Alcaraz comfortably winning the second and third sets 6-2 and 6-0.

The win has now set up a second-round clash with Albert Ramos Viñolas, with Alcaraz insisting before the tournament began that his status among the favourites gives him extra “motivation”. He said: “People are going to think that I’m one of the favourites to win Roland Garros. I don’t have it as tension, I have it as a motivation.”

Former British number one Tim Henman is among those who feels Alcaraz will be able to challenge the likes of Nadal and Djokovic to win the French Open. “I think if Rafa’s foot is healthy – given his record there – you have to make him a very slight favourite, but very close behind him I would have Novak Djokovic and Carlos Alcatraz,” Henman told Eurosport.

“His confidence is incredible. It’s going to be a very, very interesting tournament. I really believe that Alcaraz can win the French Open.

“I watched him play in Miami, which was obviously on hard courts, but his movement, his speed, his balance, the power that he’s generating with his groundstrokes, is incredible. His attitude on top is amazing.

“So for him to have won Barcelona and Madrid also, he goes into Roland Garros as one of the favourites in my mind. Obviously, if Nadal’s foot is 100% then I still think he is the favourite, but I would put Novak Djokovic and Alcaraz as the second favourites.”

Plot thickens in tennis ‘photo of the year’