The whisper got around Melbourne Park just after 2pm on Tuesday that something special was in the offing for Australian fans on the outside courts.

Sam Stosur had kept her career alive just minutes before. Maddison Inglis was in the midst of the finest moment of hers. Both Australian women delighted the crowd with great wins.

But the icing on the cake of those fine performances was that world No. 1 Ashleigh Barty was training on a back court. It proved a prized hour for ticket holders with a ground pass. 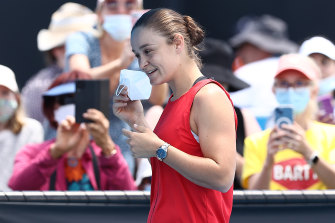 The Queenslander booked a midday training slot mindful that she would be facing Italian qualifier Lucia Bronzetti in an afternoon match on Rod Laver Arena on Wednesday.

It is shaping as a special day at Melbourne Park, and not just for the tennis to be played, with the Australian Open also celebrating its First Nations Day.

Barty touched on the importance of her Indigenous culture after a dazzling 6-0 6-1 triumph over Lesia Tsurenko on Monday and will be aiming to crown the party with another win.

Just as Roger Federer and Rafael Nadal always draw large attendances to their training sessions, the crowd surged towards Court 10 to watch Barty’s work on her game.

Almost all were masked, though the sheer number of fans meant social distancing was impossible as they craned their necks to get a glimpse of the Wimbledon champion.

Those behind the stands had their phones held high in a bid to capture footage of the 25-year-old as she went through a regulation training regime.

About 10 fans were watching a match between Liudmila Samsanova and Emina Bektas on an adjoining court. The crowd gathered to watch Barty was about 20 times as large.

At one stage, Barty started swiping through the phone of her coach Craig Tyzzer while taking a quick breather, but it is doubtful she was checking her social media accounts.

The use of technology for coaching is commonplace and became even more regular during the pandemic.

During pre-seasons, the Roland Garros champion will assess footage on an iPad to check the progress of a slight technical adjustment.

Inglis, who upset US Open finalist Leylah Fernandez to claim her first win at a grand slam, said fans and players alike were lucky to have examples like Barty and Stosur to aspire to.

“Sam and Ash are both amazing people and amazing role models. We’re pretty lucky to have those girls as people to look up, as Aussie tennis players,” she said.

“Those girls, they always have time for a chat. Ash in the locker-room, she’s always, ‘Good luck, Madds.’ She’s so supportive, which is so lovely, I think. They’re really great girls.”