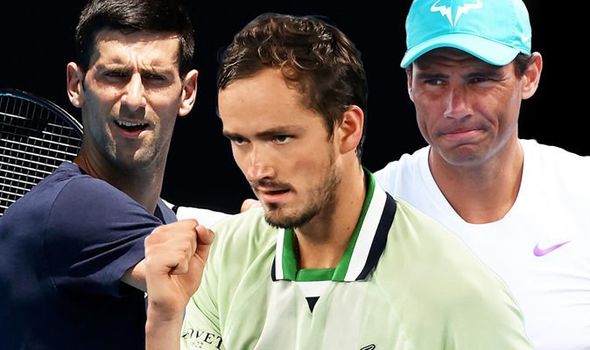 Daniil Medvedev wants revenge for his US Open final defeat to Rafael Nadal in the Australian Open final – but stopped short of saying he wants to do Novak Djokovic a favour in the battle to end be the most successful male player of all time.

The Russian lost his first major final to the Spaniard in New York in 2019 – the left-hander’s 20th and last Grand Slam title.

Medvedev won his first major at the US Open last September when he stopped Djokovic’s bid to win a calendar Grand Slam – and win a male record 21st major title.

Now Nadal has the chance to set the record – and world No 2 Medvedev has more than one reason to stop him, but he says doing it for Djokovic is not one of his main goals because he’s firmly focused on his own glories.

MUST READ: Tsitsipas casts doubt on Mevdevev with dig ahead of Nadal final

“Every final is always new. If you think too much about the past, it is not good either. We know that he is going for the 21st.

“I am going to do everything I can, I am going to give everything, tennis-wise, physically, mentally, to be at my best because that is the only way that I can beat him in a final.”

Medvedev has had an eventful journey back to the Australian Open final where he lost last year to Djokovic.

He accused sections of the Aussie crowd of having a “low IQ” after getting booed while beating Nick Kyrgios – and clashed with the umpire as he knocked out Stefanos Tsitsipas in a stormy semi-final.

He also needed to save a match point in his quarter-final win over Felix Auger-Aliassime.

“It’s been great,” he smiled. “It’s been definitely emotional. It started with the match with Nick, which is just emotional in all the aspects that we can call it.

“I think it started there, and this energy kept on going with different ones in every match. Some matches I got mad with something, the Felix match was just crazy in terms of tennis and the score.

“The matches with Stefanos are always emotional. Yeah, it’s been a great run, and I’m happy that I have the chance for the title on Sunday.”

The 2022 Australian Open men’s final will get underway at around 8.30am UK time on Sunday.

US Open 2020: Serena Williams trying to ease pressure she puts on herself