Tennis: Medvedev puts all the pressure on Djokovic

The Russian had defeated Djokovic in three of their previous four meetings prior to the Australian Open final.

And he’d looked in perilous form in Melbourne over the past two weeks, beating Stefanos Tsitsipas in straight sets to reach the final.

Djokovic had also been troubled by an abdominal injury earlier in the tournament, leading to suggestions that Medvedev could go on to win his first Grand Slam.

But the world No 1 has proven to be unbeatable at Rod Laver Arena over the past decade- when a title is on the line and that looked the case once again this time around. 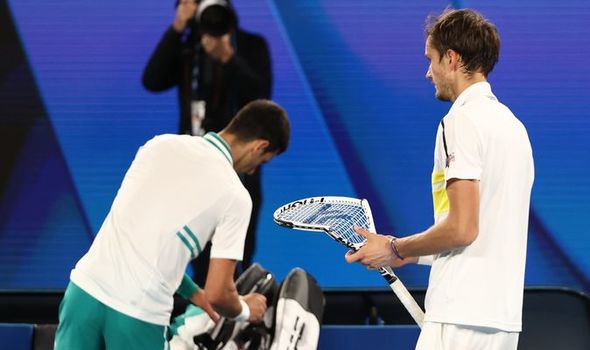 Djokovic won the all-important first set after both players went back and forth with breaks of serve.

It put even more importance on the second set for Medvedev to level the match and it’s clear the pressure was getting to him.

The 25-year-old could be seen getting more frustrated throughout the set as he lost consecutive service games to start the set.

And as Djokovic took a 5-2 lead, Medvedev responded by letting out some anger on the Melbourne Park court.

Medvedev took his racket and smashed it on the floor, obliterating it to pieces.

But Former British No 1 Annabel Croft was far from impressed with Medvedev’s show of anger.

“The bounce of Medvedev’s racquet was pretty close to his head and could have hit him. It could have been dangerous – and pretty embarrassing,” she said on BBC Radio 5 Live.

He looks like a child throwing his toys out of the pram. He’s like a Monopoly board tipper.”