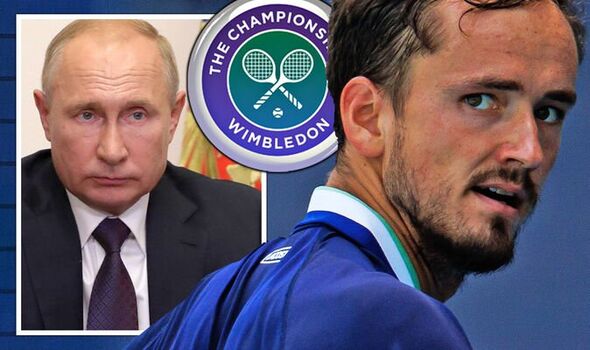 Daniil Medvedev is set to be banned from Wimbledon unless he signs a declaration stating he does not support Russian president Vladimir Putin. The US Open champion and two-time Australian Open runner-up must distance himself from Putin in public to be granted clearance to play.

Russia has been thrown out of the football World Cup after the invasion of Ukraine. But tennis has allowed Russian and Belarusian stars to carry on playing under a neutral flag like competitors at the Winter Olympics.

Now sports minister Nigel Huddleston wants all athletes from Russia and Belarus to prove they are “genuinely neutral” to be allowed to compete in events in the UK. This would require “assurances” that they do not support or receive money from Putin or the Russian regime – a demand which will be impossible and even dangerous for world No 2 Medvedev and other top stars like Belarus world No 5 Aryna Sabalenka.

Huddleston said: “We did make the request to governing bodies relating to individual sportspeople that if they (Russians or Belarusians) wish to participate in a UK sport, they are independent and neutral – and genuinely so.

“We wish to get the assurance of that in a written declaration that they are not receiving money from Putin, Russia or Belarus. That they will not be making supportive comments of Putin, Russia or Belarus. If people are saying they are neutral athletes, we want the assurance that they are genuinely neutral and therefore there isn’t any connection with Putin.

“If some individual sports or entities choose to do an outright ban of Russian or Belarusian athletes, then we will support that as well. But if they chose to go down the neutral route, then we are requesting they get that assurance.”

The Grand Slams can decide to implement different rules from the ATP and WTA while Wimbledon followed all UK government guidance during the pandemic. Asked for his thoughts on Russia’s declared interest in rivalling the UK and Ireland for the right to host Euro 2028, Huddleston added: “Government policy is that Russia is a pariah on the world stage when it comes to sport. They should be treated as such and that remains the case.”

Asked recently about whether Russian players should still be allowed to play, Medvedev said: “It’s definitely not for me to decide. I follow the rules, I cannot do anything else. Right now, the rule is that we can [play] under a neutral flag. I want to play my favourite sport. I’m going to be there to try to play for the fans, play for the people, for myself.

“Tennis is a very individual sport. So far, [the stronger sanctions] we are seeing are more [in] national teams or some team sports. Let’s see how the situation evolves. I don’t have any response to Wimbledon. Everybody knows what’s happening, so it’s basically of course impossible to ignore it, but I always said everybody has different opinions on different things in the world.

“I always said I’m for peace. It’s very tough in life to talk what is fair and not fair. So I of course do have my own opinions on different topics, but I prefer to speak about them with my family, with my wife, where we can sometimes disagree but we can discuss.”