Home » Tennis » Defeat ‘not an option’: Brother says Djokovic will fight on

Novak Djokovic’s brother says the tennis star is full of emotions but determined to fight for “justice” in court on Monday.

Djordje Djokovic spoke to media in Serbia overnight, describing his brother as emotional about his detention and the prospect of being deported from Australia and denied the chance to compete for the Australian Open title if his legal case fails this week. 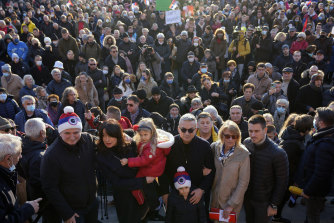 Novak Djokovic’s family, including brother Djordje (right) at a protest in Belgrade.Credit:AP

“Novak could have left Australia by now, but had he done that, he would have admitted he is guilty which he is not and defeat, which is not an option,” Djordje told Serbian media.

“What’s left is to await the court decision. I don’t know what he’ll do if the decision doesn’t go his way, and he doesn’t know either. He is full of emotions, and tennis and the grand slam are currently the last things on his mind.

“The only thing he wants is to see justice served and the truth revealed.”

Djokovic’s brother reiterated the family’s claim that Novak’s entry paperwork was done through Tennis Australia after he was cleared to compete via a blind Tennis Australia/Victorian government process that granted him a medical exemption.

“He didn’t complete any forms, that was done through the Australian tennis federation,” Djordje said.

“A Czech player, who had the same papers as Novak, is also being deported. Novak does not want to withdraw but to see justice done for him and everyone else.”

Hundreds of Djokovic supporters rallied in Belgrade, Serbia on Friday local time to protest his detention.

His father Srdjan Djokovic described his son’s struggle to play at the Australian Open as a fight against “globalists who want to ruin everything”.

“He is fighting for himself, his people and all freedom-loving nations in the world,” Srdjan Djokovic said.

Djokovic’s father also said Australians “have been in captivity for two years,” referring to lockdowns during the pandemic.

“He [Djokovic] is in prison, not in custody, not in a hotel,” Srdan Djokovic said. 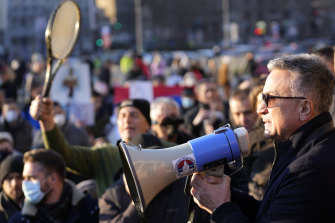 Srdjan Djokovic speaks during the protest.Credit:AP

“They took away all his things, took away his wallet, and returned it to him after a few hours.”

Djordje also said his brother was laughing on Serbian Orthodox Christmas Day despite being stuck in a hotel room.

“He went through all phases,” Djordje said.

“He was angry, unhappy, sad and now he is ironically laughing. He is peaceful today and today at Christmas he decided not to bother with ‘he said, she said’ but leave the authorities to do their work and determine the facts.”

‘An onslaught on my psyche’

Czech player Renata Voracova believed the focus on Djokovic’s entry to Australia led to her being detained by authorities after initially being allowed into the country despite being unvaccinated.

Voracova spoke with Czech outlet idnes.cz overnight describing the shock of being put into hotel detention.

She said she wasn’t against vaccination but wasn’t able to get the shot before coming to Australia due to contracting COVID-19 in recent months.

“I was busy. I planned it for weeks after the season and unfortunately … Well, unfortunately now I actually caught COVID at that time,” Voracova said. 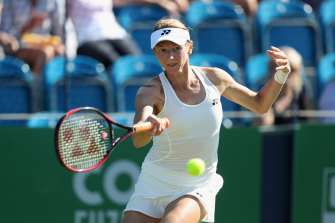 Renata Voracova is being held in the same hotel where Djokovic is being detained.Credit:Getty Images

“And there was no room for vaccinations because I was to fly to Australia [the] next week.

“I’m not like Djokovic, I’m not completely against vaccination. As I say, our cases are very different.”

Voracova said she was misled by Tennis Australia and was barely challenged by Australian Border Force officials when she first arrived, but her case would take longer to get to court and may not be successful.

“For two days I’ve done almost nothing other than sending emails to lawyers, the Australian Tennis Association, and the people who are in charge of visas [to] help me,” Voracova said.

“I did everything they asked me to do. Apparently, Tennis Australia has misled us, which is annoying. I wanted to focus on tennis, not visas, quarantine. It’s really weird that I spent a week here, played a match and then they came for me.

“It was an onslaught on my psyche. I felt the worst when they told me they would cancel my visa. Even the lawyer sitting there with me said that I had all the necessary confirmations correct.

“They really didn’t act rudely or vulgar. But some quarantine practices are not pleasant. You have to report, everything is allotted. It feels a bit like a prison.”

She described the conditions at the Park Hotel as “not pleasant” and she planned to fly home as soon as she could but was awaiting advice on how to do so.

“I don’t even know it’s the Park ‘Hotel,’” Voracova said.

“They brought me here early in the morning. I’m in the room and I’m not allowed to go anywhere. Conditions are common, the category of a better hostel.

“They checked my health. They brought me food. An escort is guarding me in the hallway.”

‘Ash has the better game, but …’: Why Kerber is toughest test