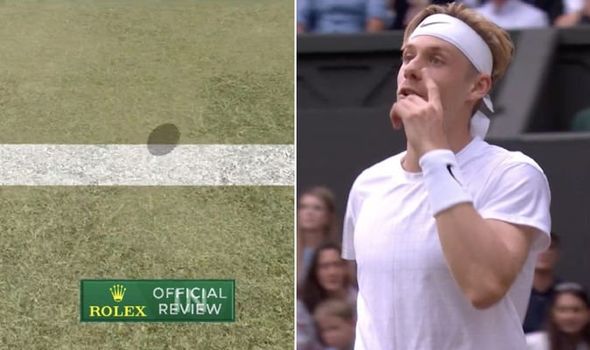 Wimbledon semi-final Denis Shapovalov was involved in a bizarre argument over a Hawkeye decision during his semi-final clash with Novak Djokovic at the Championships.

The Canadian lost the first set following a thrilling tiebreak, despite leading 5-3 at one stage.

And Shapovalov seemed tense in the second set as he strangely contested a Hawkeye decision on centre court.

Djokovic hit a shot that was deemed to have bounced within the boundaries of the court, but Shapovalov challenged the decision.

The 22-year-old went as far as fist-pumping once he had challenged, so certain was he that the ball had actually bounced out.

But the Hawkeye replay showed that the ball actually bounced on the baseline, meaning that the original decision stood and that Djokovic won the point in the third service game of the second set.

Most players usually accept the verdict of Hawkeye but Shapovalov remained insistent that the ball had bounced beyond the baseline.

He turned around in amazement and stormed up to the umpire’s chair to further his argument against the verdict.

Close-up footage on the BBC’s coverage of the Championships showed Shapovalov pointing to his eye and wagging his finger, as if to suggest that he had seen where the ball had landed.

Australian Open 2021 day 5: What will snap lockdown mean for the tennis?