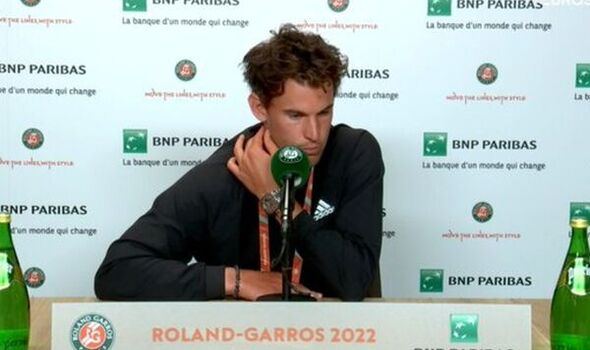 Dominic Thiem says tennis stars should ‘keep in mind the big picture’ as he weighed in with his opinion on Wimbledon losing its ATP ranking points for banning Russian and Belarusian players.

The Austrian was speaking after he was knocked out in the first round of the French Open in a straight-sets defeat to Bolivian world no 87 Hugo Dellian.

“Let’s keep in mind the big picture,” he said. “What’s happening in tennis doesn’t matter. Let’s hope peace can be back in Ukraine.”

Thiem’s comments come amid debate that has intensified between players and the tennis authorities on the decision. Much of the conversation in the early stages of the second Grand Slam of 2022. Announcing the decision the ATP said they had taken the option ‘with great regret and reluctance’ but added they saw ‘no other option’.

In response, ‘a deeply disappointed’ Wimbledon said: “We believe these decisions to be disproportionate in the context of the exceptional and extreme circumstances of this situation and the position we found ourselves in.

“We remain unwilling to accept success or participation at Wimbledon being used to benefit the propaganda machine of the Russian regime, which, through its closely controlled state media, has an acknowledged history of using sporting success to support a triumphant narrative to the Russian people.”

One of the ironies of the decision is that it will cause Novak Djokovic to lose his ranking as world no 1. The prestigious title will be inherited by Russian player Daniil Medvedev.

The decision was also met with anguish by Ukrainian star Sergiy Stakhovsky. He claimed the ATP’s stance shows they are “on the side of invaders and murderers”.

However Rafael Nadal has been more supportive of the Russian players. Speaking after Wimbledon decided to ban Russian and Belarusian players the Spaniard said: “It’s not fair on my Russian colleague. It is not their fault what is happening at the moment with war.”

Thiem lost 6-3 6-2 6-4 to Dellian, making 42 unforced errors as he struggled to gain any rhythm in the match. The Austrian has struggled with a wrist injury over the last couple of years falling from world number three to 194th.

In his post-match interview he explained he was still struggling with tension in his wrist: “I have no serious physical issue, I don’t have any mental problem with the forehand, even if I missed a lot,” he said. “The forehand is OK, but in competition I’m missing the nice feeling, there’s more tension.

“There’s not enough power in my shots yet. The first serve doesn’t earn enough. Sometimes I make stupid decisions in the rallies, like dropshots. It’s gonna take time until it’s fine again.”

While disheartened by his current form he believes he can make a return back to the top of the tennis rankings. In the meantime he appreciates that it will just require patience and alot more work.

Thiem added: “I’m not doing anything different in training sessions than before. I started to have it very consistently six or seven weeks ago. I just have to be patient. It’s gonna take a few more months until I can really say: OK I can beat those guys again.

“It’s not the greatest feeling to go into a Grand Slam or an ATP event knowing behind the head that all is not perfect in practice. I don’t play like I would like to in practice.”

Australian Open: Tennis legend Pam Shriver says a hard quarantine will be worth it