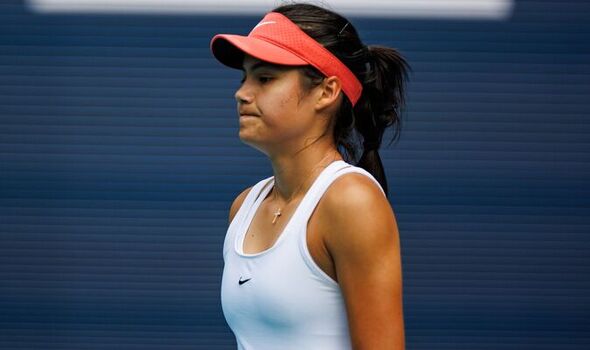 Emma Raducanu is on the receiving end of criticism once again, this time at the hands of four-time Grand Slam champion Kim Clijsters. The Belgian tennis player appeared to throw shade at the 19-year-old while praising her colleague Iga Swiatek for reaching the world No 1 spot aged just 20.

Swiatek will ascend to the top of the WTA rankings on Monday after current world No 1 Ash Barty announced her shock retirement earlier this week. The Pole had been closing in on the recent Australian Open champion and guaranteed her place at the top by defeating Viktorija Golubic 6-2 6-0 in Miami on Friday.

Like Raducanu, Swiatek was a surprise Grand Slam winner at the postponed 2020 French Open, coming into the event as the world No 54 and beating the likes of former champion Simona Halep to win the event for her first ever title, becoming the youngest champion since Rafael Nadal in 2005.

The win propelled her to No 17 in the world and the Pole has continued to improve, winning four titles – three of which are WTA 1000s –  since her French Open victory, qualifying for the WTA Finals and becoming the only female singles player to reach the second week at all four Majors in 2021.

Players have been sharing their support for the 20-year-old since she secured her place at the top of the rankings, with predecessor Ash Barty among those saying Swiatek “deserves” the No 1 spot. Kim Clijsters, a former No 1 herself, is another player who has praised Swiatek and appeared to condemn Emma Raducanu in the process.

“There’s a certain type of focus that is on tennis, and tennis only. There’s a drive there that I admire very much – a drive that I recognize. She’s had great results in the past, but she still wants to improve,” the four-time Major champion said of the soon-to-be world No 1.

The Belgian then hit out at one of Swiatek’s fellow young Grand Slam champions who she claimed had become a “princess”, pinning the player in question’s losses down to new sponsorship commitments. Raducanu became the first qualifier in history to win a Major at the US Open last year aged just 18 and has gone on to sign brand deals with the likes of Dior, Tiffany & Co, Evian, British Airways and Porsche.

“We’ve seen others that kind of take a step back and say, ‘Oh, I’ve won a Slam now, I’ve made it. There’s sponsors coming in and I get treated like a princess wherever I go’,” Clijsters continued. “Just because you’re the No 1 player and have won Slams, doesn’t mean you should treat other people differently. I feel like Ash Barty did that amazingly, and I think Iga has that focus, too. a lot of respect for the other people around her.”

Raducanu herself has recently hit back at claims that her sponsorships are “distracting” her from tennis and causing her early losses. The 19-year-old said that the criticisms were “unfair” and revealed how little time the brand deals actually took away from her schedule.

that it is unfair, but it’s something that I have learnt to deal with more and become a bit more insensitive to the outside noise. At the end of the day I feel like my days [with sponsors] are pretty limited,” she said after her opening loss in Miami. “I’m not even doing crazy days. I’m doing three to four days every quarter [in total], so it’s really not that much. I’m doing these things, but I’m training hard, putting the hours in and, especially now, I feel like I just need to get more volume and more capacity. I am doing a lot and I’m spending a lot of time at the club.”