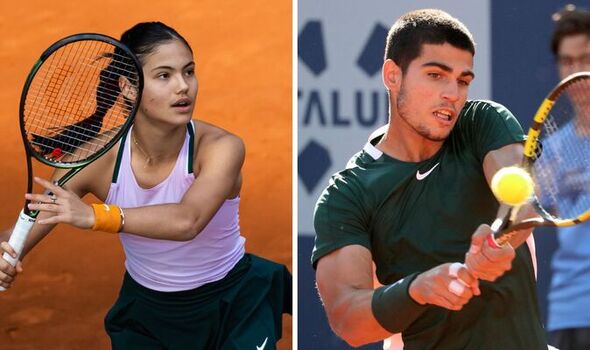 Emma Raducanu has praised her “incredible” fellow teenager Carlos Alcaraz after a stunning start to 2022 that has seen the 18-year-old win three titles and break the world’s top 10. Alcaraz, Raducanu and the Brit’s US Open final opponent Leylah Fernandez were hailed for their teenage success in Flushing Meadows last year.

Raducanu shared her opinion on Alcaraz during the Madrid Open, with the ATP world No 9 fresh off the back of winning his fourth career title in Barcelona. “I think what he is doing is incredible,” the US Open champion told Eurosport, after the Spaniard broke the world’s top 10 aged just 18.

Piling praise on both Alcaraz’s game and his off-court demeanour, she added: “But it is even more impressive how genuine and kind he is off the court. It is incredible how he is able to practically take the racquet out of his opponent’s hand, it is definitely very exciting.”

During the Brit’s run to the US Open title, Raducanu, Alcaraz and her finals opponent Fernandez were all celebrated as a trio of lower-ranked teenagers enjoying huge results in New York. The WTA world No 11 had even been spurred on by the results of her fellow teens, saying during the tournament: “It definitely plays a part in motivation. I wanted to join them as well.”

Raducanu will be hoping to follow in Alcaraz’s footsteps and crack the world’s top 10 on the WTA Tour, currently sitting one spot out at No 11. She is playing her first professional clay season and has already enjoyed success on the surface, achieving her best result of 2022 on the indoor clay courts of Stuttgart, where she reached the quarter-final.

The 19-year-old has picked up where she left off so far in Madrid this week, defeating Tereza Martincova for the second time in two weeks 7-6(3) 6-0 in the opening round after dispatching her 7-5 7-5 in her first-ever pro clay match at the Billie Jean King Cup, before ousting fellow teen Marta Kostyuk 6-2 6-1.

Raducanu and Alcaraz headline Tuesday’s night session at the Caja Magica, with the ninth seed in the women’s draw taking on Anhelina Kalinina before the 18-year-old plays his first match of the tournament against Nikoloz Basilashvili. Alcaraz made his Masters 1000 debut in Madrid last year, receiving a wildcard and winning his opening match against Adrian Mannarino.

He then faced his idol Rafael Nadal on what was his 18th birthday and lost to his compatriot, but has returned this year as the seventh seed and one of the favourites for the title, with a Masters 1000 title from Miami already under his belt.

Murray asked if he regrets being in the same era as Federer, Djokovic and Nadal