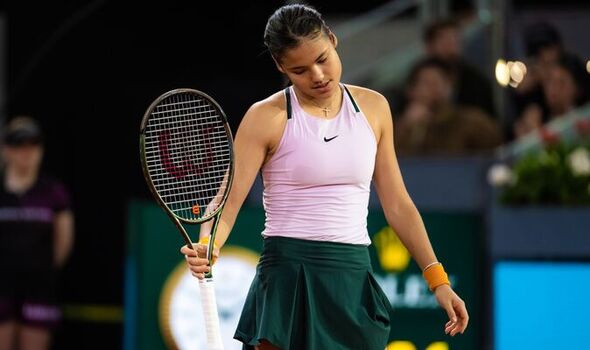 Emma Raducanu has been told to “toughen up” after her recent string of injuries, including more blistering at the Billie Jean King Cup tie after severe hand blisters saw her crash out of the Australian Open. More than 5,000 Express Sport readers voted in a poll, expressing their concerns for the world No 11 and admitting she needed to get tougher.

Raducanu has suffered multiple injuries and niggles so far this year in what is her first full season on the pro tour. She suffered blistering during her second-round exit at the Australian Open before a leg injury forced her to retire in Guadalajara. It was a stiff back that plagued the teen in Indian Wells and Miami and she suffered more blistering, this time on her feet, during her one-sided BJK Cup loss to Marketa Vondrousova before battling more back issues in Madrid.

The 19-year-old admitted she was left feeling “helpless and redundant” and was forced to bathe her feet in “surgical spirit” after barely being able to walk in her 6-1 6-1 defeat during Britain’s recent BJK Cup qualifier tie against the Czech Republic, and off the back of her woes in the team tournament, 58 percent of Express Sport readers voted that she needed to toughen up “a lot”.

Another 23.3 percent said she needed to “slightly” toughen up, while 18.8 percent thought she didn’t need to. 55.9 percent also expressed concern for the US Open champion’s future if she continued to struggle with injuries and niggles. 23 percent said they were “very concerned” for her future, with Raducanu having admitted she thought she had little chance to win several matches this year as a result of injury, including her most recent defeat to Anhelina Kalinina in Madrid.

19.4 percent were “slightly concerned” with another 13.4 percent “about 50/50” worried about the impact of injuries on the teenager’s future career. But it seems plenty are also backing the teenager to overcome her early niggles as she adjusts to life on the tour, with 44.1 percent saying they were “not concerned at all”.

The 19-year-old has since admitted that her body is usually able to resume normal training after a couple of days off after “overload”, speaking following her Madrid Open defeat in which she dealt with a bad back. “A lot of the time with me it’s just overload and then two or three days’ complete rest and I’m OK to start training again,” she said.

Raducanu also admitted to going into the match with little expectations of winning, adding: “I would have given myself a five percent chance of winning that match, and for it to almost happen, I think that was a positive thing.”

And it seems injury could already be a concern for her next tournament, next week’s Italian Open in Rome. After struggling with her back in Madrid, the Bromley local couldn’t rule out missing the upcoming WTA 1000 event as she said: “I’m not sure when I start. Maybe Monday or Tuesday. I hope it’s enough time because it would be a real shame to miss it.”