Home » Tennis » Even Serena is barracking for our Ash

If anyone could normalise this most abnormal of Australian Open lead-ups, it is Ash Barty. Literally normal service resumed when she took the court against capable American Shelby Rogers on Friday. Barty’s 10 aces made all the difference in a testing match.

Barty won what was essentially a glorified hit-up. With seven simultaneous tournaments in session at Melbourne Park, and a lost day to make up, it is quite probable that there were more tennis players on site than spectators. One was Serena Williams. 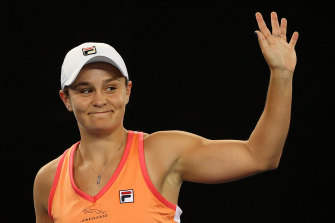 Ashleigh Barty after her win over Shelby Rogers on Friday.Credit:Getty Images

“She’s obviously the crowd favourite,” said Williams, speaking in front of a stadium that had been nearly empty for both their matches. “Whenever I’m not playing her, I’m rooting for her.”

Two moments acted as reminders of what endears Barty to Australians and what has been missing in the 12 months since she last played. Both could go under the “touch of class” heading.

The first was at a decisive pass in the super tiebreaker that resolved this match after Barty and Rogers had won a set each. Barty swung under the ball in a great backhand arc, like the conductor of an orchestra flourishing his baton. Like the conductor, it was one-handed, of course.

It wasn’t really a drop shot, more a backhand slice. But before her agile opponent could get to it, it had bounced twice. In all ways, it put the match out of Rogers’s reach. Even the television lens misted up then, though that might have been a buffering issue.

The other was when she was returning to the dressing room after play. Inside the entrance to the tunnel leading away from court, Barty dropped her bags and fished out a face mask.

All players are cautioned to wear masks when not on the court, but not all remember at the end of matches. Most of the tournament auxiliaries in the corridor were not. Accomplishment and grace: evidently, it is not too much to ask of our sports stars.

Barty could not have known that a camera was monitoring her exit. She was just being thoughtful. Her prowess sets her far above the rest of us, but she has never allowed herself to become giddy there. OK, so the mask sported an AB insignia. There has to be a few perks with the No.1 mantle.

After playing no official matches at all since last February, they’re coming thick and fast now for Barty, singles and doubles, day after day. She’s feeling it, in a good way. “I feel fit. I feel healthy,” she said. “Obviously, a little bit of soreness is good knowing that you’ve been able to test yourself.”

She was honest about her performance this day. Up a set and a point away from leading 3-1 in the second, she suddenly found herself in the teeth of a storm that swept Rogers to five games in a row. “She hit me off the court sometimes,” Barty said. 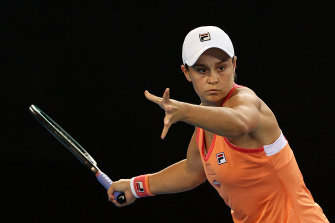 Accomplishment and grace: Ashleigh Barty impresses on and off the court.Credit:Getty Images

It is a mark of Barty’s prowess that she was able to regather herself in the super tie-breaker. So she goes on, like all at Melbourne Park, searching through their muscle memories, shaking out the dust.

“Each match has been very different, different challenges, different things I’ve had to overcome, which is the best thing,” Barty said. “To be able to work through those and give myself another chance to play a little bit better the next day, focus on some new challenges for the next day.”

One other condensation was apparent. Most now refer to the third show court at Melbourne Park where Barty played simply as MCA. Seemingly, it has become the court that dare not speak its name.

Barty’s male counterpart as centre of Australian attention was also on court on Friday. Nick Kyrgios played under obvious injury duress as he lost in straight sets to Croatian Borna Coric.

He also swore repeatedly, complained about a lack of towels, damned Melbourne’s weather and when there was nothing left to lose dashed a racquet into the court, then threw the wreck into the empty stands. It cost him a penalty point, but by then the match was over.

At Melbourne Park, the new normal was starting to look very much like the old.

Ruthless Medvedev sets up showdown with world No.1 Djokovic