Nick Kyrgios gave it all he had, but in the end, in the midday Montreal heat, there were just too many aches and pains.

The mercurial Australian’s nine-match winning singles run came to a disappointing end in the quarter-finals of the Montreal Masters 1000, worn down by fatigue, a sore back, and the implacable serving of Poland’s Hubert Hurkacz.

Kyrgios did not call a trainer, or complain, but looked off the pace physically. He also had plenty on his mind with his parents unwell.

“They’re not very well at the moment. So, I don’t really care about ‘no winning streak’. 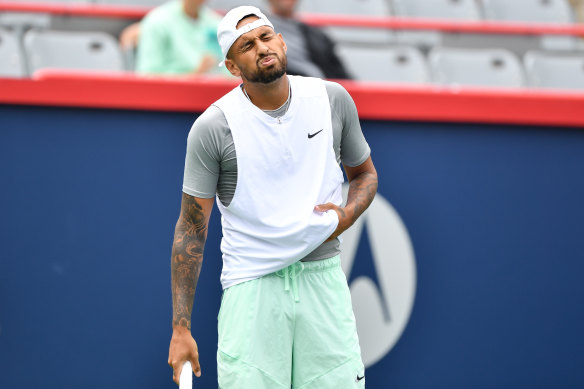 Nick Kyrgios has bowed out in Montreal.Credit:Getty Images

“I got two more tournaments [Cincinnati and the US Open] left before I can go home.”

Kyrgios had won 15 of his past 16 singles matches, with the only defeat against Novak Djokovic in the Wimbledon final. But that is a lot of tennis for a player who has pursued a less busy schedule in recent years.

In Washington last week he won the singles and the doubles, playing 10 matches in all. This was thus his 15th match this month in the US hardcourt swing.

“Nick was maybe a little bit injured, which might have hurt his serve,” said Hurkacz. “With both of us serving so well, that few per cent can make the difference.”

But he swiftly went 0-3 down in the final set and required four game points to hold for 1-3. But on Kyrgios’ next service game Hurkacz saved four game points before breaking at the first attempt to go 5-1 up and end the Australian’s resistance.

“Nick has been playing really unbelievable throughout the past few months,” added Hurkacz. “Battling against him, it’s very challenging, but it’s also fun.

“He can make every single shot. He doesn’t really have that many weaknesses, if any. I was just trying to serve good and stay aggressive.”

In the semi-finals Hurkacz will play fourth seed Casper Ruud.

Watch all the action from the US Open ad-free, live & on demand on Stan Sport, with matches streaming in 4K UHD from August 30.