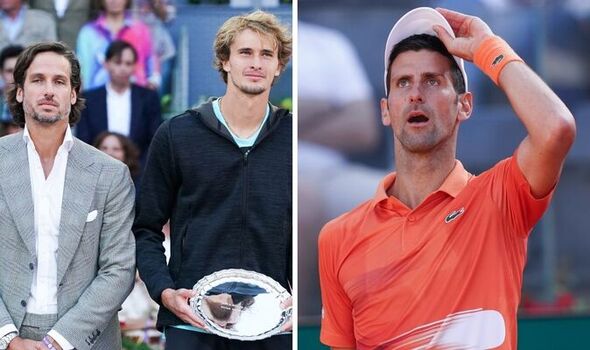 Feliciano Lopez has responded after Alexander Zverev slammed the scheduling decisions at the recent Madrid Open and was backed up by Novak Djokovic. The current world No 102 is also the director of the Madrid Masters and hit back at the criticism, saying it was “difficult to please everyone”.

Zverev slammed the tournament he has previously claimed is one of his “favourites” after going to bed “at 520am” on the day of his final against Carlos Alcaraz. The world No 3 was forced to play his semi-final into the night after the matches earlier in the day went long, and won just four games in a beatdown to the world No 6 in the championship match.

After ripping into the organisation of the event, he was backed up by Djokovic who agreed with the German’s frustration, saying: “You cannot end your seminal match at 1am and play the final the following day. I understand that they want to sell more tickets by scheduling a night session on Saturday, but it may cause problems.”

But tournament director and former world No 12 Lopez spoke out and explained the scheduling decisions, saying the timings weren’t solely up to the organisers. “In the end it is very difficult to please everyone, we have been aware for some time that it is over late, that there are players, who, especially on the day of the semifinals, have a small disadvantage compared to the first to qualify,” he said, per Sportskeeda.

JUST IN: Djokovic laughs off Nadal duel suggestion and admits rival is ‘better’

“But there are commitments with international televisions that affect the schedule, the same as the men’s final is scheduled after the News of Spanish Television.” Zverev had piled the praise on his opponent after his 6-3 6-1 loss and called him the “best player in the world right now” during the trophy ceremony, but lashed out after the match.

“One thing I have to say is that the ATP’s job was an absolute disgrace this week,” he said after the final. “Two days ago I went to bed at 4.30 am. Yesterday I went to bed at 5:20 am. If a normal person goes to bed one night at 4am and the next night at 5am, it will be difficult just to be awake for them.

“And for me to play a final against Carlos Alcaraz, who for me is the best player in the world right now, in a Masters 1000 event, the next day, it is difficult.”