It is not quite the dream semi-final that old-school, tantrum-loving fans had been hoping for. That would have been Nick Kyrgios v Novak Djokovic. But Friday night’s meeting between Daniil Medvedev and Stefanos Tsitsipas should still add much-needed pepper to our staple diet of forehands and backhands.

Tsitsipas and Medvedev started eyeballing each other during a meeting in Miami, almost three years ago. They have never really stopped. Perhaps it is not quite on the level of Jimmy Connors leaping over the net to poke his index finger into John McEnroe’s face. But unlike most modern tennis feuds – which are usually resolved for the benefit of sponsors – this one is still bubbling away. 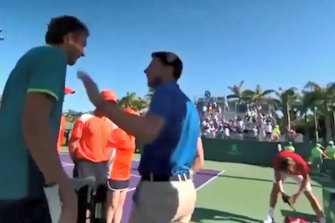 Daniil Medvedev had to be held back by officials after a Miami Open match with Stefanos Tsitsipas in 2018.Credit:Nine

As Mouratoglou put it after Williams’ notorious 2018 meltdown in New York: “People want to feel the emotion, root for someone, they want to be shocked, happy, sad.”

There was certainly plenty of emotion when Medvedev played Tsitsipas in Miami that same year. So much, in fact, that the chair umpire had to leap down from his chair to prevent physical contact.

The storm really broke after the final point, as Medvedev said he had been called “a bullshit Russian” and accused Tsitsipas of being “a small kid [at 193 centimetres, five centimetres shorter than himself] who doesn’t know how to fight”.

So, while there might be a place in Sunday’s final against Djokovic and significant prize money at stake, neither man will be looking that far ahead. The grudge comes first, and Tsitsipas’ delirious celebrations at London’s O2 Arena two years ago demonstrated how much a victory would mean to him.

Mind you, if Medvedev wins – and he is the clear favourite, thanks to an 11-match streak against top-10 opposition – his favourite response is to coolly refuse to celebrate at all.

History suggests that neither man will prosper against Djokovic on Sunday in any case.

The defending champion has played eight finals in Melbourne and won the lot.

And his abdominal issue appears to be improving day by day.

After dispatching Russian qualifier Aslan Karatsev in straight sets on Thursday, Djokovic said: “This is the best I’ve felt in the entire tournament.”