Home » Tennis » Has Nick Kyrgios dashed his major hopes as well as his racquet?

It finished with Nick Kyrgios dashing a couple of racquets into the court, then walking off, leaving someone else to clean up after him. No Kyrgios match – win, lose or default – can go by without a tantrum or 10. No contemporary tennis player is more indulged.

This time, Kyrgios’ fury might have had an extra edge to it. He must have intuited that he may never have a better chance to win a major. Novak Djokovic was absent, Rafael Nadal had fallen by the wayside and Kyrgios had dealt with world No.1 Daniil Medvedev. 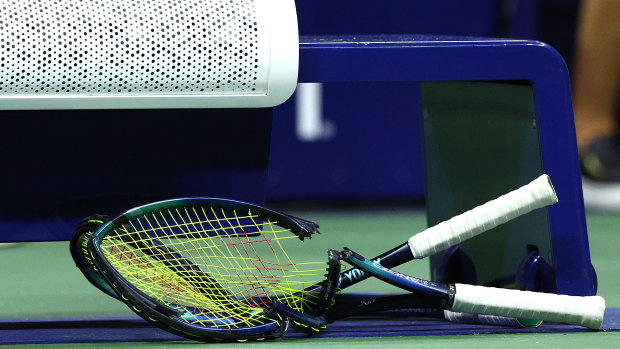 Nick Kyrgios destroyed his racquet after the loss.Credit:Getty Images

The door was wide open. None of the last eight had won a major. Kyrgios was installed as the legitimate favourite and played as the people’s favourite. For all his outward insouciance, this would have weighed heavily.

He played well enough in that Kyrgios sort of way. Mixed in with all the usual tricks and tics was plenty of sublime tennis. But ultimately he was worn down. In the fifth set, Karen Khachanov was stronger, steadier and always the more likely winner.

Good for him and good luck to him. But this wasn’t Djokovic or even an ailing Nadal. It was Khachanov, a player the same age and ranking as Kyrgios – and no better skill set – who until now has never been past a major quarter-final. 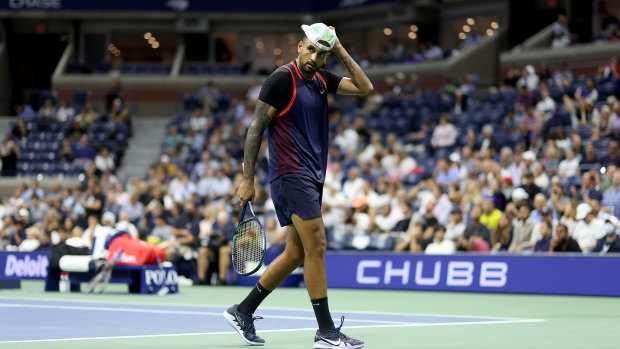 It’s no disgrace to lose to him, but it’s a concern to be outlasted by him when the draw was so wide open. You can’t imagine Nadal or Roger Federer when they were on the rise letting such an opportunity go begging.

That’s the majors done for this year for Kyrgios, and you suspect the season. He’s homesick, which is understandable. But as he looks back over his shoulder from JFK Airport, he will see in another New York quarter-final 21-year-old Italian Jannik Sinner and 19-year-old Spaniard Carlos Alcaraz.

This is the future, coming fast. By Monday, one of them may well have won his maiden major title. When Kyrgios resumes next year, they will be there, loins girded, and Medvedev will still be there, and Nadal might be, and Djokovic almost certainly will be free to play all the majors again.

It’s impossible to think that they will all melt away from Kyrgios’ path in the same tournament again, which means he will have to beat them.

He can, but will he? 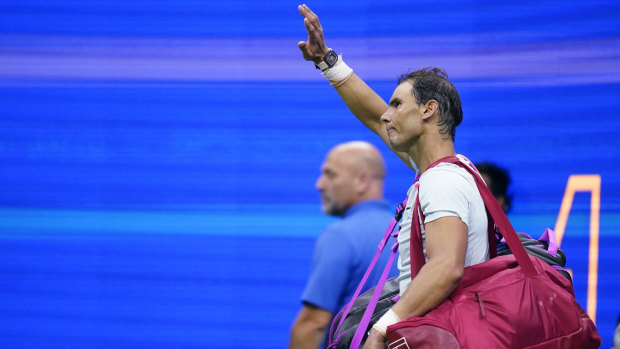 Kyrgios is 27, though you’d hardly know it. The point is that all in the top 10, except superstars Djokovic and Nadal, are younger than him. His window is closing faster than he might think.

He’ll affect not to care, which is his shield and alibi. But he cares enough to have run up a 31-9 record this year, enough to reach a Wimbledon final. You don’t do that frivolously. He said after Wimbledon that it had cured, rather than sharpened, any urge to do it all again. Yet here he was, on a fast track to the US Open final until derailed. 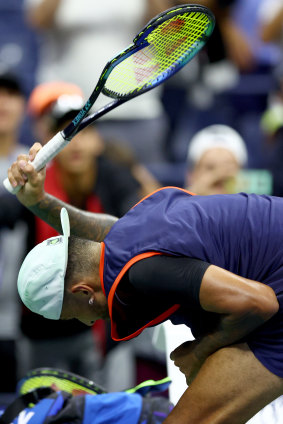 There goes the Kyrgios racquet.Credit:Getty Images

Somewhat mysteriously, Kyrgios enjoys plenty of goodwill. People are attracted by his tennis and thrill to his brattish on-court persona. Nadal must wonder why he bothered to be so courteous and respectful all these years.

What you see is what you have to tolerate if you like tennis and want Australia to thrive at the sport. It’s the standard half the country chooses to walk past, the standard Kyrgios just smashed into the ground years ago. It’s why just as many are repulsed as drawn to Kyrgios.

He was mostly calm during his encounter with Khachanov, but you could never be sure whether it was the calm of resignation to his fate, gathering concentration or the prelude to another infantile storm. After match point, we saw.

Watch every match of the US Open streaming ad-free, live & on demand on Stan Sport, with centre court matches available in 4K Ultra HD.