Home » Tennis » ‘I tried to play:’ Kyrgios on the defence after withdrawing in Mexico

Nick Kyrgios has accused the Mexican Open crowd of "disrespect" after being jeered following his retirement against Frenchman Ugo Humbert due to a left wrist injury.

The 24-year-old defending champion, who was on court for 32 minutes, later vented his anger in an expletive-laden news conference.

The Australian had delighted fans with some superb tennis en route to the title in Mexico last year but it was a different story in Acapulco when he was forced to quit the first-round clash after losing the opening set 6-3.

Battling a wrist injury that has hampered him since the Australian Open, Kyrgios is set for a likely drop in the rankings after his early exit.

Speaking post-match, Kyrgios defended his decision to pull out after spending little more than 30 minutes on court before the fans turned on him. 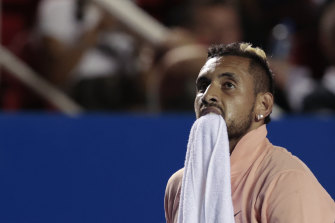 An injured Nick Kyrgios pulled out after the first set in Mexico. Credit:AP

"I honestly don't give a sh..," he said, when asked about the crowd.

"I tried to play, I supported with the media, I wanted to give people some tennis but it was not possible.

“My wrist is just not ready to play. I could feel it on every backhand. It's unfortunate after the memories I had last year. It's tough for me.”

Kyrgios took a medical time out when trailing 4-1 in order to treat his wrist. "I’m going to pull out anyway. Just tape it," he reportedly said while getting treatment.

This week, Australia’s Davis Cup captain Lleyton Hewitt said Kyrgios' Australian Open campaign – where he spearheaded the athletes' response to bushfire crisis and later exited in the fourth round after a grinding match against Rafael Nadal – took their toll.

Kyrgios has since withdrawn from two recent hardcourt tournaments in the United States.

Kyrgios, placed on probation by the governing body of men’s tennis over his behaviour last year, had shown a different side to his character in the lead up to this year’s Australian Open.

He had called on the tennis world to help the victims of Australia’s bushfire crisis and triggered an appeal that raised millions of dollars.

His exit robs the tournament of a potential blockbuster clash with Rafael Nadal, who advanced with a 6-3 6-2 win over fellow Spaniard Pablo Andujar.

Hewitt said it would always be important for Kyrgios to pick and choose which events he played in to manage his workload on tour.

"He entered Delray Beach and New York before that, but after how many matches and big matches he played at the Australian Open he had to withdraw from New York, he wasn't ready to go then," Hewitt said.

"And I think that's really important for him mentally and physically throughout the year, depending on how he is feeling. Last week in Delray Beach he went there and tried to play, he wasn't quite ready.

Kyrgios' involvement in next week's Davis Cup tie against Brazil in Adelaide is now in question.

"Now he is in Acapulco, I think it is going to be such an important time for him to pick and choose. Sometimes coming into a Davis Cup tie you want guys to play a lot of matches," Hewitt said.