Home » Tennis » ‘It’s a nightmare here’: French player melts down on court and off at US Open

Confined to her hotel room at the US Open except for practices and matches, French tennis star Kristina Mladenovic could find no refuge on the court on Wednesday.

She was seemingly in total command of her second-round match against Varvara Gracheva, a 20-year-old from Russia playing in her first grand slam singles tournament. 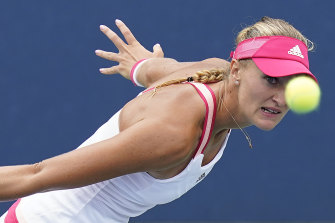 Kristina Mladenovic, of France, returns a shot to Varvara Gracheva, of Russia. Credit:AP

Mladenovic, the No.30 seed, was tantalizingly close to a dominant victory. She led 6-1, 5-1 and 15-0 on her own serve before Gracheva came back to win the game. In the next, Gracheva fell behind 0-40 but saved four match points to hold serve.

The comeback was underway — although it looked much more like a collapse — as Gracheva went on to win 1-6, 7-6 (2), 6-0 with Mladenovic struggling to keep her composure and her shots in play during the final set.

After winning 11 of the first 13 games in the match, she ended up losing 12 of the last 13, one of the most dramatic turnabouts in US Open history.

"It's a nightmare what we are experiencing here," Mladenovic said in French, fighting back tears. "I have only one desire, and that's to get my freedom back and even that we don't have yet."

Mladenovic is one of a group of players who have faced tighter restrictions and more frequent coronavirus testing after tournament health officials determined that they had close contact with Benoit Paire, a French men's player who tested positive for the coronavirus on Saturday.

Mladenovic, who has repeatedly tested negative for the virus, said she had one practice session with Paire in New York, but what caught the attention of contact tracers was a game of cards she played with Paire and others in the lobby of the main hotel where players are staying on Long Island.

Mladenovic has said the game lasted less than an hour and that she was wearing a mask.

Paire, who was withdrawn from the tournament and confined to his hotel room, said on social media on Wednesday that he has since tested negative for the virus.

"If I had known that playing cards for 40 minutes with a mask with a player who tested positive and ultimately negative would have these consequences, I would never have set foot in this tournament," Mladenovic said.

Chris Widmaier, a spokesman for the US Tennis Association, said a negative test coming after a positive test does not change the requirement to isolate an individual.

As recently as last month, Mladenovic, who is also one of the world's best doubles players, was uncertain whether she would play in the U.S. Open. But she and many other Europeans decided to come, in part because of assurances that strict health measures were in place.

But since Sunday, Mladenovic has faced much stricter measures than the general population of players. She was required to sign a revised agreement with the USTA in order to remain in the tournament.

Others who have had to sign the new agreement because of contact with Paire include French men's players Adrian Mannarino, Grégoire Barrère, Richard Gasquet and Édouard Roger-Vasselin. Kirsten Flipkens and Ysaline Bonaventure, women's players from Belgium, also have reportedly been required to sign.

The new restrictions include daily tests for the coronavirus — the Open uses widely utilized PCR tests — and isolation from the rest of the players. Mladenovic and her group were required, for example, to take the hotel stairs with an escort instead of using the elevator.

The players were also prohibited access to all common areas at the hotel and the Billie Jean King National Tennis Centre, which is hosting the tournament.

"I have the impression we are prisoners or criminals," Mladenovic said. "For even the slightest movement, we have to ask permission even though we are tested every day and had 37 negatives. It's abominable. The conditions are atrocious."

Mladenovic and partner Timea Babos, who reached the US Open women's doubles final in 2018, are the No. 1 seeds this year and scheduled to play their opening match Thursday.

But even if Mladenovic is eliminated from the doubles tournament, she and her group are, for now, required to remain in quarantine at the player hotel until September 12, the final Saturday of the US Open. There is the possibility that French and American authorities could permit the group of French players to depart for France by air under strictly controlled conditions before that date.

"We are fighting to have our freedom," Mladenovic said.

Neither Pella nor Dellien tested positive, but both were required to quarantine after contact tracing determined that they had spent extensive time in Galván's company without wearing masks.

Both finished their quarantine period before the U.S. Open and were allowed to play singles; each player lost in the first round Tuesday.

After his defeat, Pella complained that there had been a double standard because the group of French and Belgian players had been allowed to play despite having had close contact with Paire.

"Imagine if you were in lockdown for two weeks, and the Benoit case was like that," Pella said, snapping his fingers. "They were like, 'OK, you will have a bubble inside of the bubble, and you will be allowed to practice and play the U.S. Open.' Imagine how you would feel if that happened to you?"

Widmaier said that the same standards were applied in both instances.

As it turned out, getting the opportunity to play in the US Open on Wednesday was a recipe for heartache for Mladenovic.

For nearly two sets, she was in command, her flat and powerful groundstrokes finding their marks. But her game gradually came undone as she made double faults and unforced errors in bunches and the understandably emboldened Gracheva began attacking the net and her shots with success.

"I completely fell apart," Mladenovic said. "I was playing super well, but I didn't know how to finish it. I was on a tightrope."

She still had four match points, however.

"I would like so much to tell you all the many things that are happening here; it's abominable how they are treating us," she said. "But I don't want it to be an excuse for my defeat. It's not the USTA's fault I didn't convert my four match points. We shouldn't get the subject and the headline wrong. I had it 6-1, 5-1."

But she said that during the third set, the weight of the last few days became much more of a mental burden.

"I was in distress," she said. "The third set was a collapse, a total collapse."