‘Grow up’: Nick Kyrgios is lashed by former umpires chief following Aussie gun’s ‘out of control’ tirade against official – with calls for fiery star to be SUSPENDED intensifying after Miami outburst

Nick Kyrgios has been told to ‘grow up’ following his wild tirade against a tennis umpire in Miami on Wednesday.

Kyrgios, 26, lost his head during his ATP Tour match against young gun Jannik Sinner. After being penalised a point, then a game, the Australian was almost defaulted from the match as tempers flared.

He smashed a racquet and labelled Brazilian umpire Carlos Bernardes an ‘absolute clown’ after shaking hands with his Italian opponent at the net following his fourth round defeat. 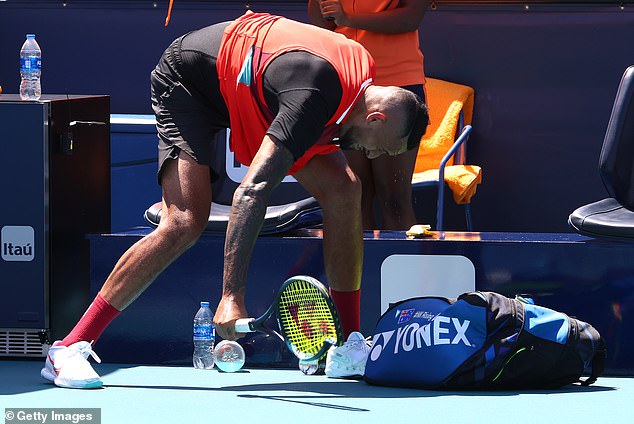 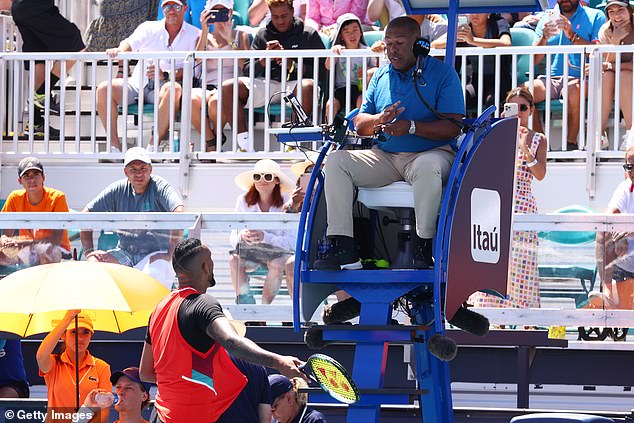 ‘This is one of the biggest tournaments and you guys can’t do your job, it’s embarrassing,’ raged Kyrgios. ‘I genuinely want to know what’s wrong with you. The crowd hates you.’

The crowd had also upset him, leading him to declare: ‘Everyone’s just the worst.’

The ATP Tour must now decide whether to suspend him or give him another fine after the £18,000 he was docked two weeks ago at Indian Wells during his defeat by Rafael Nadal. The circuit is notoriously lenient when dealing with its marquee players.

But former umpire Richard Ings has urged the Tour to clamp down on Kyrgios’s ‘out of control’ behaviour, insisting that officiating is at the best level it has ever been. 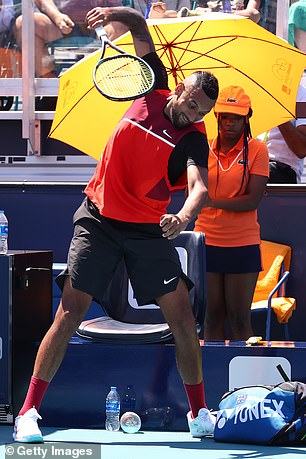 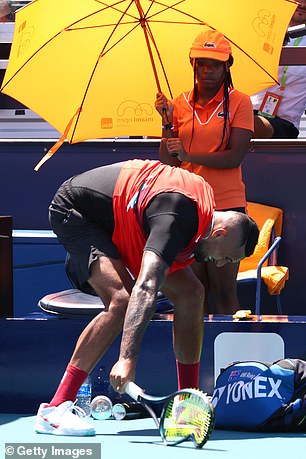 ‘Well done Carlos Bernardes in fairly applying the ATP Code of a Conduct towards Nick Kyrgios,’ he posted on Twitter.

‘Now let’s see if the ATP back office starts supporting officials in the field by actually suspending someone. This on court disrespect of officials has gotten out of control.

‘The frustrating thing for me as a former ATP EVP (executive vice-president) Rules and Competition is that while player disrespect of officials on court is worse than I can recall, the standard of on court officiating is better than it’s ever been,’ Ings said.

‘Players have never ever had better officiating. Grow up.’ 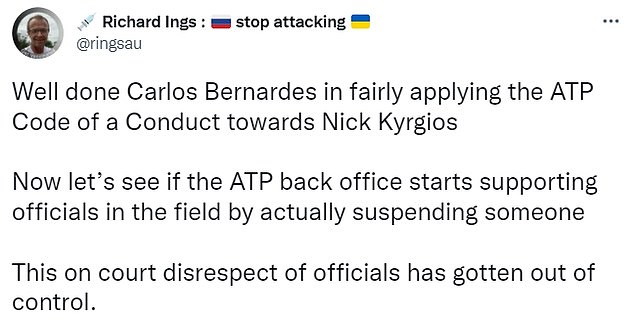 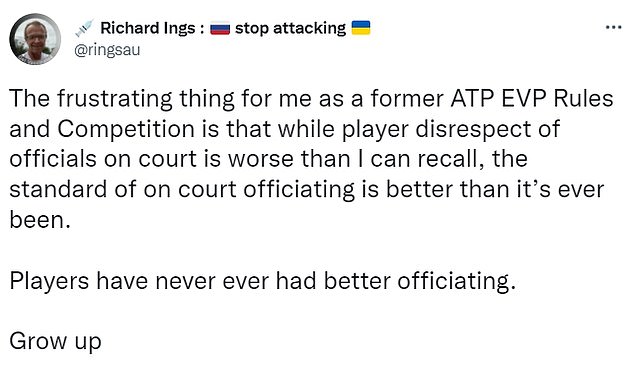 Kyrgios said later: ‘If you are being booed by the crowd you are not doing a good job. I’ve never been part of a match where the umpire has been hated so much. The ATP don’t give a f***.’

‘How much do I bring to the sport? That’s the problem with tennis is that it doesn’t protect our stars at all. We love to outcast them.

‘The ATP never defends their players and stands up to them. I am used to it, have been used to it my whole career and it sucks.

‘I have one incident where I threw a racket which didn’t hit anyone, I know it can be dangerous but I went back the next day and apologised to the kid the next day. He will remember that for the rest of his life.

‘Me, my girlfriend, my team all have to deal with the bad comments and the ATP don’t give a f***.’