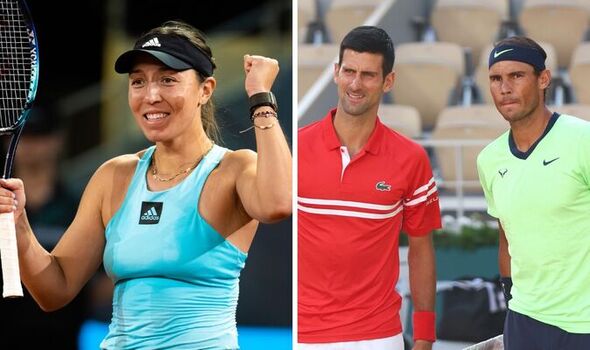 Jessica Pegula will fight for the biggest title of her career when she takes on fellow first-time WTA 1000 finalist Ons Jabeur in the Madrid Open championship match. The winner will also pocket £890,000 (€1,041,570) but the prize money is nothing compared to £4.7 billion ($5.8 billion) the world No 14 is set to inherit from her father Terry, making her richer than the likes of Novak Djokovic, Roger Federer and Rafael Nadal combined.

Pegula has enjoyed a successful career so far, currently one off her previous career-high of world No 13 with overall earnings of £2.9 million ($3,586,705). But the 28-year-old is clearly not in the sport for the money, as she is the heir to her father Terry Pegula’s billions, with Forbes’ 434th richest man in the world earning a fortune from oil, real estate and sporting investments, including owning the NFL team Buffalo Bills.

While the world No 14 currently has just one title to her name, winning the WTA International in Washington back in 2019, she is richer than three of the sport’s biggest names, Djokovic, Federer and Nadal. The trio lead the list of all-time career earnings in tennis, with the Serb banking £125 million ($154,875,793) with an approximate net worth of £162 million ($220 million).

But Pegula’s eyes are firmly on the tennis numbers rather than the prize money though, as the American could make her top 10 debut with a title win in Madrid. Both Pegula and Jabeur went into the 2020 season within one place of each other in the rankings, at world No 76 and 77 respectively.

The Madrid finalist has now touched on their journeys to the top of the sport ahead of a first WTA 1000 final for both. “For me and Ons, it’s pretty crazy. It shows you what hard work and determination, playing week in and week out and just trying to get better, you can get to the top, as long as you believe it. So I think it’s great for both of us. It means a lot to me,” Pegula said after defeating Jil Teichmann 6-3, 6-4 to reach the championship match.

Pegula and Jabeur are all square in their head-to-head with two victories each but have only ever met on a hard court. The Tunisian has won their two most recent meetings in Dubai earlier this year and Chicago last season, while Pegula got the better of the world No 10 twice in 2018, in Quebec and Montreal.

The seventh seed in Madrid also fired a warning to Pegula ahead of the final as she shared her motivation to win. “I’m going to put a positive here. I want to win this final. I’m going to put my heart, my favourite dropshot, my forehand in,” she said after defeating Ekaterina Alexandrova 6-2 6-3. “The main important thing for me, I know it’s winning the title but knowing that I gave it all during the match and not regretting that. I know if this one is not coming, then there is another one.”

Australian Open: Tennis legend Pam Shriver says a hard quarantine will be worth it