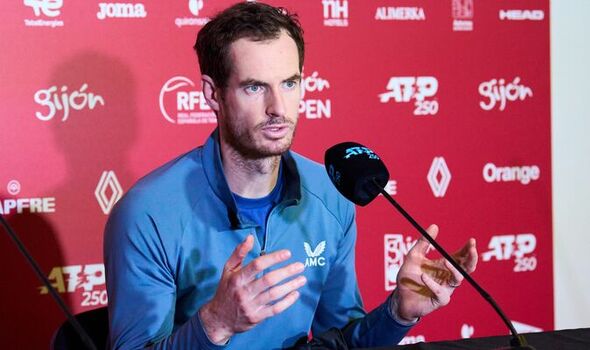 Andy Murray has confessed that it can be “difficult to keep up” with the young players on tour after defeating Alejandro Davidovich Fokina at the Gijon Open. The three-time Major champion recently ruled out the idea of retiring soon but admitted it wasn’t easy to keep competing with some of the rising stars.

Murray earned an impressive victory over Davidovich Fokina in Gijon, taking out the sixth seed 7-5 6-2 in the opening round. The world No 48 took a wildcard into the ATP 250 tournament in his bid to boost his ranking before the end of the season and got off to a strong start against one of the home favourites.

But the former world No 1 confessed that it wasn’t easy to compete with some of the younger stars on tour, despite getting wins over the likes of Stefanos Tsitsipas and Jannik Sinner earlier this season. “In the first set he was playing much better than me,” Murray said of the world No 31 after their match.

“He had a lot of chances to get the second break of serve and I managed to stay tough in those moments. At the 4-3 game he played a bad game to give me the break back and after that, I started to play a little bit better.” And the win meant even more for the 35-year-old, who said things weren’t getting any easier on the tour.

JUST IN: Stefanos Tsitsipas’ mum admits Kyrgios is the only one who affects him

He continued: “Obviously I still enjoy it. It’s not easy, the young guys are moving up extremely well, and they’re all hitting the ball harder and harder. Sometimes it is difficult to keep up, but I still enjoy it.

“We had a fantastic crowd today, a really nice atmosphere for the first round of a tournament. I really enjoy playing in new places, I’ve never been here before and it’s a beautiful place, so I’m happy to be here.”

Murray’s words come after he ruled out retiring recently, having been at the Laver Cup for Roger Federer’s send-off as the Swiss star ended his 24-year career in London’s O2 Arena with his Big Four rivals by his side. “Look, I’m really not thinking about that right now,” he said during the team tournament.

“I’m still playing competitive tennis and physically feeling good against top players. I just need to start really turning some of these tight losses and close matches into wins. It’s as simple as that.”