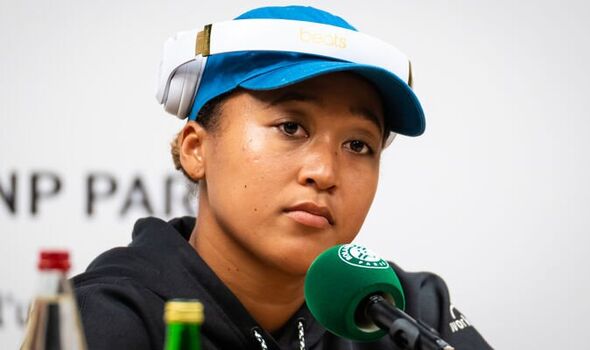 Naomi Osaka has admitted she felt “very worried” returning to the French Open after pulling out of the event last year because she did not want to speak at press conferences. The Japanese No 1 was fined $15,000 and threatened with expulsion from the tournament after her media silence following her first-round win.

She then withdrew citing mental health struggles – and revealed she had been suffering from depression since her 2018 US Open win. Osaka also missed Wimbledon last year and ended her stop-start season after the US Open.

Speaking at her pre-tournament press conference, the four-time Grand Slam champion admitted: “I’m not gonna lie. Like when I first came here, I was very worried. I was just worried if there would be people that – of course I also didn’t like how I handled the situation – but I was worried that there were people that I offended some way and I would just bump into them.

“But I think everyone has been really positive, for the most part. I’m not really so sure. I was also very worried about this press conference, because I knew I’d get a lot of questions about this. But, yeah, I think for me where I am right now, like I have – I wouldn’t want to say it’s like it hasn’t left my mind.

“Of course I’m still thinking about it, and I’m also prepping just in case like I go on the court and a fan says something like in Indian Wells. Yeah, for the most part I think I’m okay.” Osaka started crying during her second-round loss in Indian Wells in March after a fan heckled her from the stands during the first set. She then addressed the crowd at the end of the match.

She has played only three events since the Australian Open – she reached the final in Miami – and has slipped down to world No 38. Asked if tennis is now better looking after players who suffer from mental health issues, Osaka said: “I’m going to be honest. I don’t know. Like for me, I mean, I have told people that I’m seeing a therapist now and stuff.

“But like, if you’re talking about the general landscape of things, I know like after last year’s French Open that the next Slam I played was the US Open and they have like these little like retreats or things like that in the players lounge. I know here they have a mental wellness space. So I think that it’s cool that they are incorporating it.”

Osaka pulled out of the Rome Masters with a left ankle injury but she said: “There is no way I’m not going to play this tournament, so like of course you kind of have to manage things, but at the same time, like, I’m going to pop a few painkillers, like it is what it is. I feel like there is like a limited amount of years that I could play tennis, so like I have to make the best out of it.”

The Japanese star has also announced she is leaving her management group IMG to set up her own company called Evolve. “I think role models are really important, just to see somebody do something and it makes you feel like you can do the same thing too,” she said.

“I found it really interesting that there wasn’t a female athlete that’s done this before but there has been so many men. So, I don’t know. I think it’s a journey, and I feel like I’m going to learn a lot on the journey.” Her opening match is against Amanda Ansimova, the No 27 seed she lost to in the first round of the Australian Open in a third set tiebreak after failing to take two match points.

Andy Murray pulls out of Queen's due to strained stomach muscle