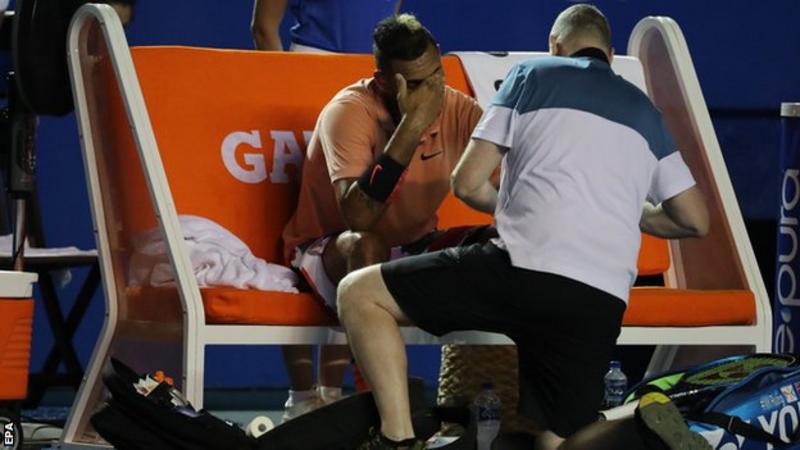 Nick Kyrgios accused the Mexican Open crowd of “disrespect” after he was booed off court following his first-round retirement against Ugo Humbert.

Kyrgios, 24, was only on court for 32 minutes before retiring with a wrist injury after losing the first set 6-3.

It was his first appearance since last month’s Australian Open because of wrist and shoulder injuries.

“I’m not healthy. I tried to come here, I tried to play,” said Kyrgios, who later swore during the news conference.

Kyrgios, who was defending champion in Acapulco, was 4-1 down when he called a medical timeout so he could receive treatment on his wrist.

He managed to continue and twice hold his serve, but after Frenchman Humbert saw out the set Kyrgios signalled that he was unable to continue.

Once the crowd realised Kyrgios was retiring, he was booed.

“I’ve been doing media for the tournament, been helping out,” added Kyrgios. “I tried to give the fans a little bit of tennis. And their disrespect?”

Kyrgios had not played since his fourth-round defeat by Rafael Nadal in Melbourne, where he had received praise for his improved on-court behaviour as well as his response to the Australian bushfires.

The Australian said he had “made progress as a human” after having been placed on a six-month probationary period and given a suspended 16-week ban in September for “aggravated behaviour” on court.

The rapid rise of Cameron Norrie, from world No 71 to Indian Wells winner