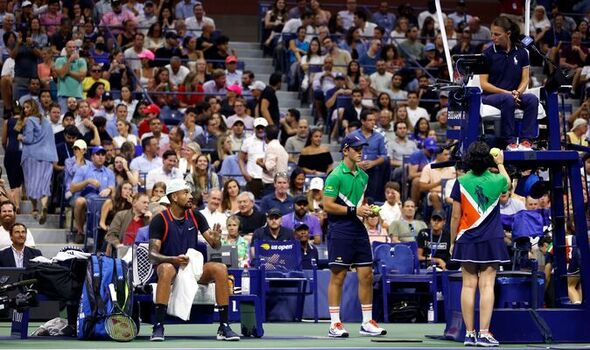 Nick Kyrgios fumed at the umpire during the first set of his US Open match with Daniil Medvedev as he accused her of starting the shot clock too early. The Aussie is notorious for his fast-paced service games but found himself running down the clock before ranting to Eva Asderaki-Moore late in the first set as he claimed she was the only umpire he had experienced a problem over the shot clock with.

Kyrgios was serving at 5-5 in the first set when he approached the chair umpire to complain about her use of the shot clock as he found himself short on time when he went to serve. “I come back from the box and there’s six seconds left,” he fumed at Asderaki-Moore

“I’ve never had a problem with it at this tournament apart from with you.” The 23rd seed continued his rant at the change of ends, sitting down with a 6-5 lead. “I’ve not had one issue, not one,” he told the Greek umpire.

“Not one issue in three months, not one. I play the fastest on tour, I’m getting back to the baseline with four seconds. What are you doing?”

For the latest news and breaking news visit: express.co.uk/sport