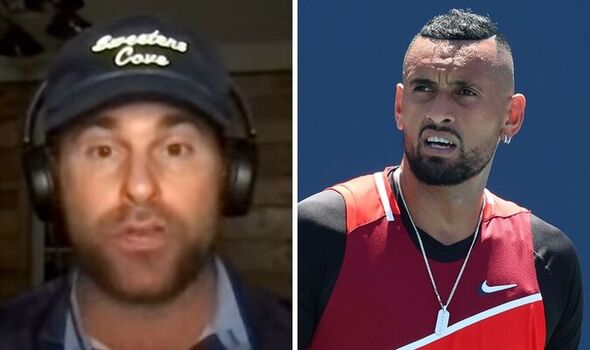 Nick Kyrgios has come under fire for his fiery encounter with umpire Carlos Bernardes but, while Andy Roddick doesn’t agree with his reaction, the former world No 1 felt the Australian’s anger at one point was justified. Kyrgios has been on an impressive run of form of late and had carried that over into Miami this week.

Wins over Adrian Mannarino, Andrey Rublev and Fabio Fognini set up a battle against No 9 seed Jannik Sinner in the round-of-16. Kyrgios appeared to be laser-focused in the early stages of the game, going toe-to-toe with Sinner.

But the world No 102 soon began to lose his cool and started to lay into the chair umpire. “He should be fired on the spot,” Kyrgios shouted while sat down during the first set.

The first set eventually went to a tiebreaker with Kyrgios slamming his racket to the floor after falling 3-1 behind. Bernardes then issued Kyrgios with a point penalty that saw the Australian drop to 6-3 before double faulting and handing Sinner the first set.

JUST IN: Kyrgios confronted by court invader after smashing racket in anger

Kyrgios returned to his chair and soon began berating Bernardes once more before slamming his racket into his bag with the chair umpire deciding to punish the 26-year-old further with a game penalty, meaning he lost his serve right at the start of the second set. Sinner kept his cool throughout to tie up the second set and progress into the next round.

But Kyrgios’ behaviour was once again the main talking point after his Miami Open exit. Roddick in fact agreed with Kyrgios’ anger at being given a point penalty at a crucial point in the first set tiebreaker.

The American feels ‘ego was maybe in play’ as he questioned the umpire’s call, but added that Kyrgios only has himself to blame for what followed.

“It’s pretty easy, once you have a warning, don’t do anything else that would warrant another warning,” Roddick said on Tennis Channel. “I actually didn’t disagree with Nick why he got the point penalty in the tiebreaker.

“Him saying, ‘this referee is bad and someone else could do better’, I feel like he has a valid point there. Carlos, who I like, might have gotten his feelings hurt. That doesn’t feel like it’s unsportsmanlike conduct.

“It feels like ego was maybe in play there. But then, it’s not the reason you’re upset, it’s how you react to it. Breaking your racket right in his face when you know the umpire is already ticking, he already wants to give you a warning.

“Your problem solving is to smash a racket to give him a break. Thats the part where you lose me a little bit. You don’t want to hear the opinions but then you do something like that where it’s kind of impossible to lay off and say that was absolutely not the right thing to do if you wanted to win this tennis match.”