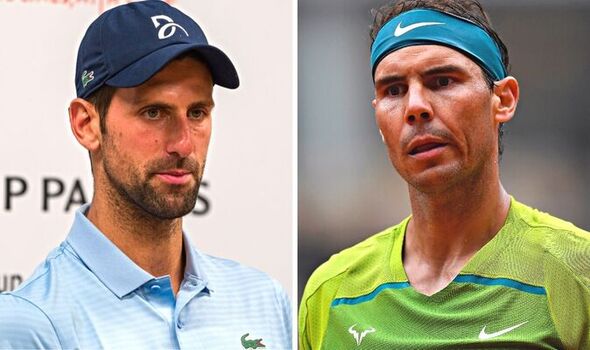 Ukrainian world No 66 Marta Kostyuk has slammed Novak Djokovic and Rafael Nadal for supporting the tennis tours’ decision to remove all ranking points on offer at Wimbledon this year. The ATP and WTA made the move to penalise Wimbledon for their ban on Russian and Belarusian players, and Kostyuk said the tours wouldn’t listen if their top players criticised Wimbledon for their ban.

Nadal is a member of the ATP Player Council, who were involved in talks leading up to the men’s tour’s decision to remove ranking points from Wimbledon, while Djokovic is the former president of the players council and the co-founder of the Professional Tennis Players’ Association. Both hit out at the All England Club for banning Russian and Belarusian players, with the world No 1 recently branding it the “wrong decision”.

Now, Kostyuk has hit out at the two legends of the sport, partially blaming them for the lack of support from the ATP and WTA. “I want my fellow players to support and understand the situation and be vocal on some things as well,” she told Reuters. “But I mean, look at what Rafa said, look at what Novak said. How can you get the support from the tour when top three players say these things?”

The 19-year-old also thanked WTA world No 1 Iga Swiatek, who had been vocal in her support for Ukraine and has continued to wear a blue and yellow ribbon during her matches since the war started. Kostyuk also claimed that the majority of players had not been consulted in the tour’s decision to remove ranking points from Wimbledon.

“I would say 80-85% of the players had nothing to do with the (WTA) decision,” she explained. “It’s so ridiculous I couldn’t believe it. None of the players’ representatives contacted me. None of them asked about my opinion, what I think. It’s like Ukrainian players don’t exist.

“I’ve been trying to be as vocal as possible but you feel hopeless most of the time about the situation. I’m still 19. What can I say? It’s not easy.” As well as hitting out at Djokovic and Nadal, the Kyiv-born teenager also criticised Belarus’ Victoria Azarenka, who is a member of the WTA Player Council, for her “personal interest” in making the decision as one of the players directly affected by Wimbledon’s ban.

Kosytuk continued: “Victoria Azarenka is in the players’ board, making decisions about points in Wimbledon, where she’s not even participating. And saying that she has no personal interest in making decisions. Just the fact that she’s present there on the calls, doing whatever. It’s ridiculous.”

And the doubles world No 58 also shared the “nightmare” of being a Ukrainian player on the tennis tour, recalling a recent doubles match at the Italian Open in which she burst into tears while facing Russia’s Veronika Kudermetova and Anastasia Pavlyuchenkova. “I started crying on love-three,” she said.

“Before the match, I was really pumped, I’m gonna go, I’m gonna win and when I went on court, I felt so weird. I started crying and I started talking to my coaches. I said I cannot be here, I don’t know why I’m playing.

“I have to win to be heard, but I don’t because there are other problems on the other side, which I’m facing. So a lot of pressure around. Suddenly there were way bigger things in life than tennis. I don’t think a lot of people faced what I’ve been facing.”