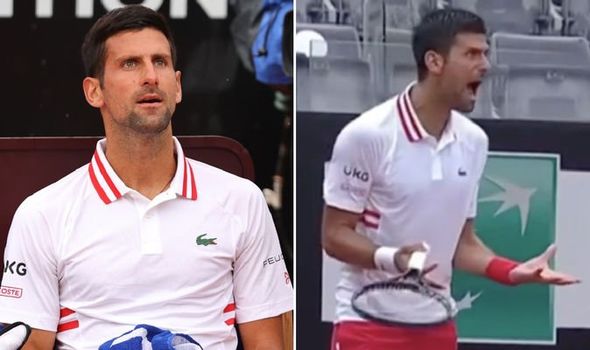 Novak Djokovic admits he was “stressed out” by the challenging conditions that caused him to rage at the umpire during his Italian Open victory over Taylor Fritz, and has since apologised to Nacho Forcadell. But the unusual nature of his win, which came despite a rain delay, will make him more confident ahead of a potential showdown with Rafael Nadal, the Serbian warned.

Djokovic overcame his big-serving American opponent 6-3, 7-6 (7-5) in his first outing in Rome, but had to wait three hours to finish the match off.

Fritz battled hard in the second set with Djokovic clearly rattled by having to play through such grim weather.

The heavy rain eventually forced the pair off of the court and upon their return later in the day, the world No 1 fought back to win a tiebreak and book his spot in the third round at Foro Italico.

That was not before Djokovic lost his temper and raged at the official, however, as the rain continued to pour.

“How much more do you want to play?” the angry 33-year-old loudly shouted at Forcadell, before adding when told the umpire would check the court: “I asked you three times and you are not checking anything.” 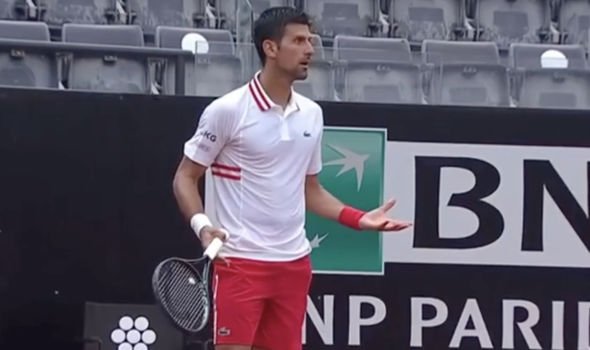 Forcadell responded: “You didn’t ask to check the court.” To which Djokovic replied: “Yeah because you told me I should make a comment and I made a comment and told you how I feel.”

“Now it’s getting harder I’m going to check the court,” the umpire added, to which Djokovic sarcastically said: “Getting harder, yeah right…”

Eventually play was stopped and the 18-time Grand Slam winner, who is the defending champion at the Italian Open, declared afterwards that the nature of his victory will only improve his confidence.

Djokovic’s clay-court form has been disappointing so far this year with a third-round loss to Dan Evans at the Monte Carlo Masters followed by a Serbia Open semi-final defeat to Aslan Karatsev.

“I kind of lost my cool towards the end of that second set when I served for the match, but at the end of the day when you overcome these kinds of circumstances and challenges, I think it brings even more confidence in you,” Djokovic reflected. 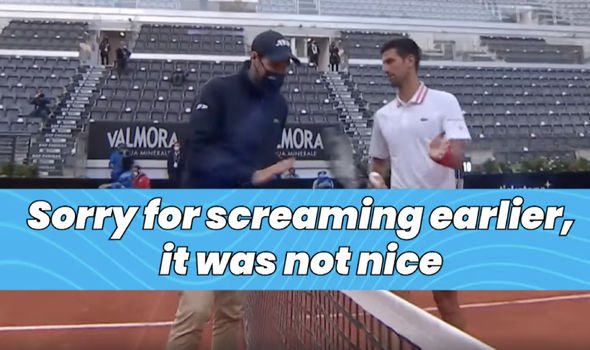 “It’s not the first time or probably the last time I’m going to experience such conditions and even with that much experience behind me, I still get upset and lose my cool.

“It’s OK, at the end of the day these are great lessons and I’ll try to take away important things from this day.

“I was stressed out in the end obviously, but I think it was the right call to stop the match. When I came back, I thought we were quite even actually till the last point.

“I’m glad that I managed to finish off this match in straight sets. I know I can play better. It was a very strange match with strange conditions.”

He went over to Forcadell before the restart of the match to apologise and said: “Sorry for screaming earlier, that was not nice.” The official replied: “No problem, it’s OK.” 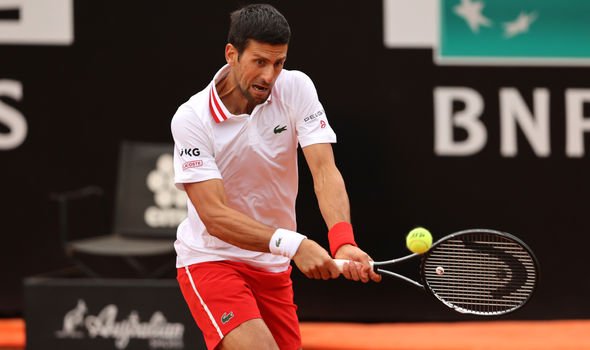 Djokovic knows he could face top seed Nadal in the final should he progress that far, though it is a packed field in Rome.

World No 8 Diego Schwartzman was eliminated by Felix Auger Aliassime however while Roger Federer, the world No 6, will be back on court at the Geneva Open which gets underway on May 16.

The Swiss posted footage on Instagram recently of himself hitting on the clay ahead of the ATP 250 event in his home country.

He said: “Hi everyone! Happy to let you know that I will play Geneva and Paris. Until then I will use the time to train. Can’t wait to play in Switzerland again.”