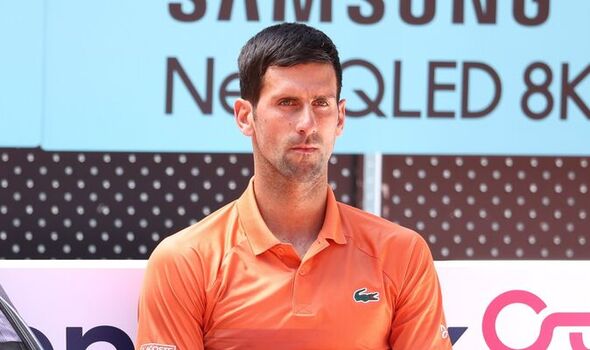 Serbian ex-tennis player and coach Radmilo Armenulic has suggested Novak Djokovic made an error parting ways with longtime coach Marian Vajda amid his difficult start to the 2022 season. As the French Open grows closer, Djokovic has yet to find his best form in four tournament appearances.

Djokovic stopped working with Vajda after the ATP Finals in Turin in November, ending their 15-year partnership. The pair joined forces in 2006 until 2017 and then reunited in 2018 after a brief separation, winning a total of 85 ATP titles and 20 Grand Slams together.

He said: “I think he misses Vajda! With him, Novak achieved better results, [and] he was mentally more stable. Ivanisevic is a new coach; he has no experience. He can share advice, but Vajda was more specific, convincing, [and] closer. Somehow he had a family relationship with Nolet, and that meant a lot to Djokovic because he is emotional.”

JUST IN: Djokovic theory quashed by Alcaraz as Serb ‘more difficult’ than Nadal

Djokovic was recently knocked out of the Madrid Open semi-final by teenage sensation Carlos Alcaraz. Armenulic has also suggested that the world number one is ‘physically unprepared’ for the French Open later this month. He has struggled to win deciding sets so far this season, which could become a significant problem in his first Grand Slam appearance of the year at Roland Garros.

“Novak is the first player in the world [world number one],” Armeulic told Serbian outlet Kurir. “If he doesn’t win a tournament or doesn’t make it to the finals, it’s a failure. If he is not the first seed at Roland Garros, he will be a big painter. Why? Well, because more serious opponents would be waiting for him in the third round.

“He is mentally stable but, in my opinion, physically unprepared. He needs to work on his condition to stay ‘number one’. He must have strength for the third set or, in Paris, for the fifth. He has a team that takes care of that. I believe they will prepare him.”

Djokovic will hope to rediscover his mojo to retain his French Open crown after a string of impressive performances helped dethrone Rafael Nadal at last year’s tournament. On Tuesday, he starts his Rome Masters run against Aslan Karatsev in the first round – the final preparation before landing in Paris.

Emma Raducanus admission about the Queen after receiving message of support

French Open 2020: Spectators to be allowed despite increase in coronavirus cases