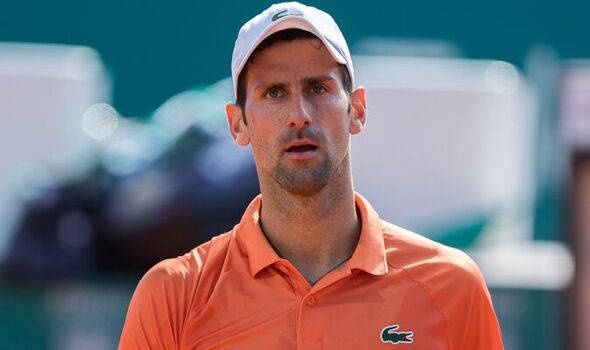 Novak Djokovic has been told to stop taking so many “breaks” ahead of his French Open title defence. The world No 1 is playing just his fifth tournament of the year after being unable to compete in Australia and America as a result of his vaccination status but has been warned that he is now the “least physically prepared” in years ahead of his first Grand Slam tournament of the season.

Djokovic has been warned over his chances for the French Open after taking “too many breaks” this year. The world No 1 didn’t start his season until February’s Dubai Championships after being kept out of the Australian Open, Indian Wells and Miami because he is unvaccinated. Former Serbian pro Radmilo Armenulic is worried his compatriot could now be undercooked heading into Paris.

“It looks a bit better than before, although I think it is the least physically prepared for this year compared to a year or two ago,” he told Kurir, commenting on the world No 1’s chances at the French Open. “He took too many breaks, which is not good. He went to Bosnia, looked at the pyramids… He didn’t need that.”

The 20-time Major champion has been finding his form in recent tournaments, reaching the final in Belgrade and the semi-finals of last week’s Madrid Masters but the former player-turned-coach thought Djokovic would still struggle physically even if he had gained confidence over the last few weeks. “The matches are a real preparation and I hope that he is slowly getting back in shape,” he continued.

JUST IN: Federer and agent ‘plan Alcaraz proposal’ after teen catches his eye

“He is mentally stable, but in my opinion physically unprepared. He needs to work on his condition to stay ‘No 1’. He must have strength for the third set, or in Paris for the fifth. He has a team that takes care of that, I believe he will save it.

The 34-year-old had suffered some third-set collapses against Andrey Rublev in the Belgrade final and Alejandro Davidovich Fokina in his opening loss at the Monte Carlo Masters, and Armenulic shared his concern for how the Serb would hold up in future final sets, though trusted Djokovic’s team to get him ready in time for Paris.

The world No 1 announced earlier this year that he was parting ways with Marian Vajda, his coach of 15 years, after making the decision at the end of 2021. And Armenulic thought the Serb was “missing” his long-time mentor as he adjusted to life with Goran Ivanisevic as his sole coach.

He added: “I think he misses Vajda! With him, Novak achieved better results, [and] he was mentally more stable. Ivanisevic is a new coach; he has no experience. He can share advice, but Vajda was more specific, convincing, [and] closer. Somehow he had a family relationship with Nole, and that meant a lot to Djokovic because he is emotional.”