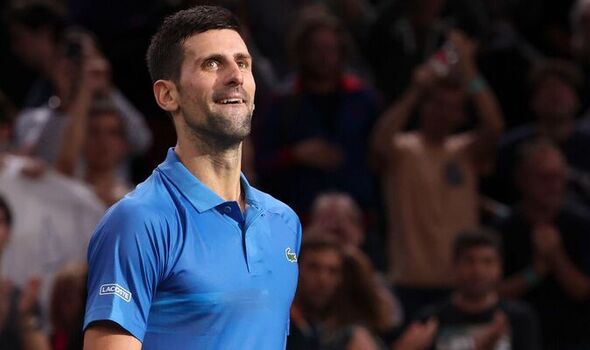 Novak Djokovic cracked a joke about the next generation of tennis after booking his spot in the Paris Masters final to face 19-year-old Holger Rune. The Dane is just six days older than current world No 1 Carlos Alcaraz, and their success has signalled the arrival of a new generation of tennis superstars but Djokovic isn’t ready to be brushed off just yet.

Djokovic will face Rune on Sunday as he bids to win his seventh title at the Paris Masters while the world No 18 will be playing in a Masters 1000 final for the first time in his young career. The Dane is the latest teenager to make waves in the tennis world following Alcaraz’s breakout year, as the 19-year-old won the US Open and became the youngest world No 1 in ATP history.

35-year-old Djokovic is well aware that a new generation of players are coming for his throne and will begin to increasingly threaten his chances of winning the biggest titles in the sport but he still believes he can remain at the top alongside the emerging stars as he cracked a joke following his semi-final win in Paris on Saturday, claiming he was part of their group.

Discussing his final with Rune, the world No 7 addressed the crowd in French and quipped: “Yes a new generation is rising. Alcaraz, Rune, myself, we are all young, all of us.” His comment comes after he vowed to continue to try and “kick the butts” of the next generation.

Looking at the upcoming crop of players who would dominate after he and Rafael Nadal retired, the 21-time Grand Slam champion said he would attempt to postpone their success for as long as he could. “I think it is good that there are some new faces, but I will not give up,” he told Eurosport ahead of the Paris Masters.

“I will make sure I kick their butts for as long as I possibly can! They will kick my butt sometimes maybe, but hopefully, less than I kick theirs.” And the Serb will get to prove himself on Sunday as he takes on 19-year-old Rune for the second time.

Djokovic faced the teenager one before at last year’s US Open when Rune was making his Grand Slam debut while ranked down at  No 145 in the world, and yet to become the top player he is now. And Rune managed to take a set off Djokovic in that match as the Serb won 6-1 6-7(5) 6-2 6-1.

Recalling that match, the 35-year-old said: “I played him only once last US Open, good battle, four sets. He has improved a lot, no doubt. I mean, he physically is a very fit guy. He’s young, so not much to lose. Just swinging through the ball.”