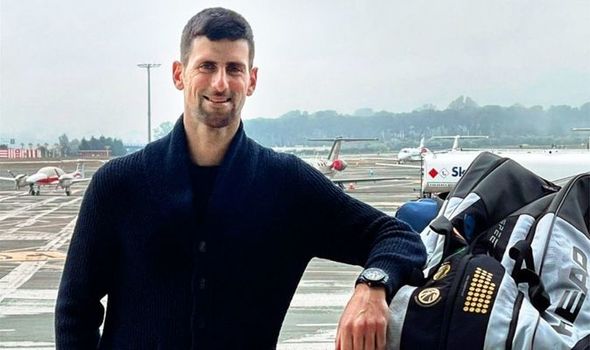 The world number one found himself at the centre of a political storm over his Covid vaccination status. He could be sent home on Monday pending an appeal.

Djokovic – who has not revealed if he has had a vaccine but spoke out against them in the past – was initially granted a visa to play in the forthcoming Australian Open in Melbourne.

But, after flying in on Wednesday, the tournament’s record nine-time winner found himself held at the airport for several hours before border officials announced he had not met entry rules.

The Serbian star, 34, was then taken off to a government detention hotel, where he remained yesterday ahead of a court deportation hearing on Monday.

The row centres on an exemption the player claimed he had been given to play in the Australian Open.

The decision to allow him into the country when possibly unvaccinated has infuriated many.

Australians have endured some of the world’s strictest Covid restrictions.

Prime minister Scott Morrison said: “Mr Djokovic’s visa has been cancelled. Rules are rules, especially when it comes to our borders. No one is above these rules.”

But Serbian president Aleksandar Vucic claimed Djokovic was a victim of “harassment” and that “the whole of Serbia” now supported him.

The player’s father, Srdjan, said his son had been held in a room guarded by police at the airport. He said: “This is not just a fight for Novak, but a fight for the whole world.”