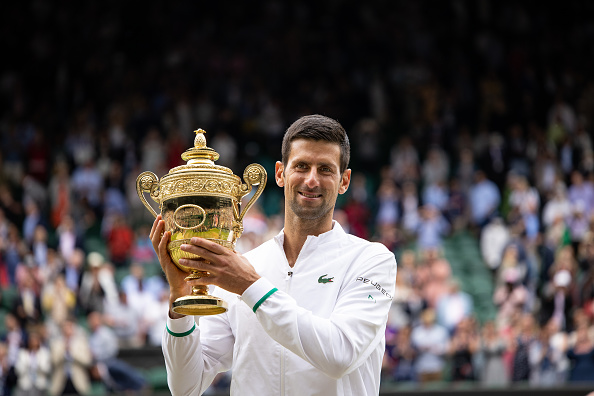 Novak Djokovic will be allowed to defend his Wimbledon title after All England Club officials confirmed players will not be required to be vaccinated to compete at the tournament this summer.

The world number one, who defeated Matteo Berrettini to win his sixth Wimbledon crown last year, has played only three tournaments in 2022 because of entry restrictions imposed by various countries, including his deportation from Australia.

With most nations relaxing their rules around the virus, though, Djokovic should be free to play a full schedule through the clay and grass-court stretches, although he is currently still unable to enter the USA.

Speaking at Wimbledon’s spring briefing, chief executive Sally Bolton said: ‘As you will be aware, the requirements set out by government to enter the UK do not include mandatory vaccination and, therefore, while of course it is encouraged, it will not be a conditional entry to compete at the Championships this year.’

Last year’s Covid-related restrictions, which included reduced crowds for most of the tournament and strict conditions imposed on the players, will all be lifted.
Bolton said: ‘We are planning to return to a normal Championships this year. And so we don’t intend to implement any of the Covid-19 measures that we saw last year in any substantial fashion.

‘But we are, of course, keeping it on our radar in case we need to take further action when we continue to engage with DCMS, public health officials and with other sports.

‘But this means that players will be able to return to their own choice of accommodation. We will see full capacity crowds for the whole event. And we’re absolutely thrilled to welcome back the wider tennis family to Wimbledon this year.’

The UK Government, meanwhile, left Wimbledon with ‘no viable alternative’ but to ban Russian and Belarusian players from this year’s Championships, chairman Ian Hewitt told the All England Club’s spring briefing.

Expanding on last week’s announcement that Wimbledon and the preceding grass-court events would be the first individual tennis tournaments to bar players from the two countries, Hewitt said the club was left with only two options – an outright ban or forcing players to sign declarations condemning the invasion of Ukraine.

He said: ‘The UK Government has set out directional guidance for sporting bodies and events in the UK with the specific aim of limiting Russia’s influence.

‘After lengthy and careful consideration, we came to two firm conclusions. First, even if we were to accept entries from Russian and Belarusian players with written declarations, we would risk their success or participation being used to benefit the propaganda machine of the Russian regime, which we could not accept.

‘Second, we have a duty to ensure no actions we take should put players or their families at risk. We understand and deeply regret the impact this decision will have on all the people affected.

‘But we believe we have made the most responsible decision possible in the circumstances, and there is no viable alternative within the framework of the government’s position to the decision we have taken in this truly exceptional and tragic situation.’