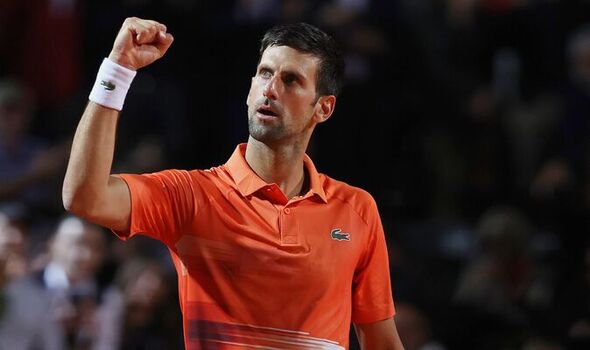 Novak Djokovic has received a boost in his quest to remain as the world No 1 after the French Open, with Daniil Medvedev playing down his chances following an unsuccessful return from hernia surgery. The world No 2 played his first match since March on Tuesday and lost to Richard Gasqet, giving hope to Djokovic in his quest to reach the most weeks at world No 1 in history.

Djokovic is defending 2,000 of his 8,660 ranking points as the reigning French Open champion, while Medvedev is defending 360 points of his 7,980 for reaching the quarter-final last year. It means all the pressure lies with Djokovic, who can only maintain his points with a second-successive title win in Paris while the Russian can add to his tally.

Based on last year’s results, even if the 26-year-old fails to win a match, the world No 1 needs at least 960 points to keep hold of his ranking, so must reach the final. But the Serb has received the filip he needed going into the clay-court Major as Medvedev admitted he had little confidence on the surface after a losing return to the tour.

The 13-time title winner underwent surgery for a small hernia and returned at this week’s Geneva Open, losing to world No 75 Richard Gasquet 6-2 7-6(5), and looking ahead to the French Open he wasn’t confident with so little time to improve. “I don’t play at my highest level on clay. I know I’m able to do some good results like I’ve done in the past, but for something like that I have to be in a rush,” he said after the match.

JUST IN: What Federer has said about injury woes with Wimbledon return on

“I don’t have as much self-confidence on clay as on other surfaces. That is why I lost that tiebreak 7-5. It is disappointing, but there were also heavier defeats in my career.” The world No 2 also admitted that the surface was often tough on his body and claimed he wasn’t a favourite for the title, though warned he could be “dangerous” if he was able to play well.

He said: “For my body, clay is the most dangerous surface. Every year I would have some problem because of which I could not be at 100 per cent. I’m not a favourite at Roland Garros, but I want to play well. If I manage to find my level, I can be dangerous.”

If Djokovic can successfully defend his title, the only way Medvedev could steal the world No 1 spot from the Serb would be by making his first final at the French Open, a monumental task for someone whose best result is last year’s quarter-final and who is coming back from injury.

Djokovic is still aiming to overtake Steffi Graf for the all-time most weeks at world No 1. He already holds the ATP record with 370 while Graf’s record stands at 377 weeks. The 34-year-old recently guaranteed he would remain No 1 for the French Open, giving him the top-seeded spot, by reaching the semi-finals of the Italian Open, a tournament he then went on to win.