Novak Djokovic has edged ever closer to his Grand Slam goal after beating Denis Kudla in their Wimbledon third-round clash on Friday. The world No 1 has proven unbeatable at Grand Slams this year with wins at both the Australian Open and French Open.

He’s been the man to beat over the past decade and, at Wimbledon, Djokovic looks unstoppable once again.

Jack Draper threatened a huge upset in the first round by taking the first set, but Djokovic was able to dust off the cobwebs before recording a resounding victory thereafter.

Against Kevin Anderson, Djokovic looked back to his best and was dominant in every aspect.

American Kudla had come through the qualifiers at Wimbledon and was going to provide a different test altogether for Djokovic. 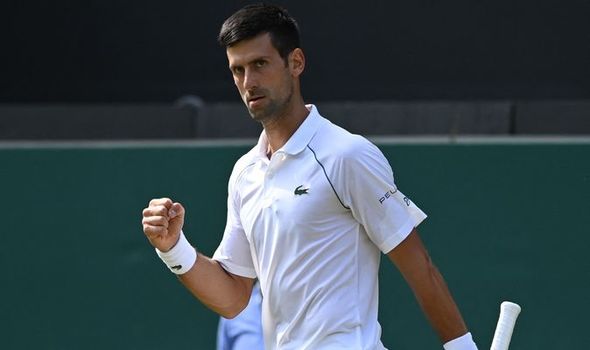 He had enjoyed strong warm-up events on grass which included wins over Dan Evans at Nottingham.

But coming up against Djokovic, Kudla was struggling to find ways to hurt the world No 1.

Meticulous in his approach and renowned for his expert level on returns, Djokovic was able to answer everything Kudla threw his way.

Djokovic didn’t take long to race to a 2-0 lead and, while Kudla threatened a mini comeback in the third, the 34-year-old eventually got the job done.

He now takes on No 17 seed Cristian Garin in the fourth round where Djokovic will once again be the heavy favourite to progress.

And Djokovic will be full aware that he is just four wins away from making more history.

He’s made no secret of his desire to finish his career with the most Grand Slam titles.

The Serbian tennis icon headed into Wimbledon just one title behind the record jointly held by Rafael Nadal and Roger Federer.

Nadal is not playing at Wimbledon while Federer challenging this year would be a miracle in itself given his recent return from injury.

Daniil Medvedev may be Djokovic’s closest challenger at Wimbledon this year, but the latter is showing no signs that he’s letting the chance of history slip away.