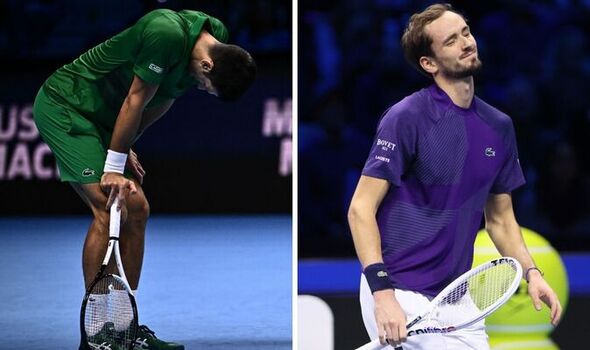 Novak Djokovic survived a huge scare as he overcame physical issues to end Daniil Medvedev’s season and defeat the Russian 6-3 6-7(5) 7-6(2) in a three hour and 11 minute marathon battle. It means the world No 5 ends the year on a four-match losing streak after crashing out in the opening round of the Paris Masters before going 0-3 in his group matches at the ATP Finals. Djokovic will now hope to recover in time for tomorrow’s semi-final after violently shaking at the end of the second set.

Djokovic and Medvedev were facing off for the 12th time in their careers though they were playing in unique circumstances, with the Serb already through to Saturday’s semi-final as the group winner while the world No 5 had already been eliminated in the round-robin stage but was still hoping to redeem himself and win his first match of the week in Turin with 200 ranking points on the line.

There was a bizarre start to the match as Medvedev had to hold off serving at 1-2 for a couple of minutes as the electronic advertising boards around the court started glitching and had to be turned off so play could continue. He managed to hold after the disruption but there was then a series of break points as both men saved one each before the five-time ATP Finals champion finally converted one to serve for the set and closed it out 6-3 in 43 minutes.

The 35-year-old looked to cement his lead as he carved out another break point in the third game of the second set but dumped the ball in the net after a 28-shot rally as Medvedev held on. Djokovic earned another break point at 4-4 as he ran Medvedev around the court in another lengthy rally before finishing the point with a winner after 22 shots, but he had his racket literally taken out of his hands as he failed to chase down a huge cross-court forehand from the 26-year-old and Medvedev served himself out of trouble with an ace.

Djokovic was then forced to run off court to sort out one of the contact lenses in his eye as the Russian was made to wait at his player bench. The 35-year-old re-emerged more than six minutes later and was tasked with trying to serve to stay in the set after the disruption, struggling upon his return as he faced three set points. But Djokovic battled through and saved the final break point with a booming forehand winner after a 26-shot rally and held in an eight-minute game.

The set then went to a tiebreak and was Medvedev who led 4-2 as the pair changed ends following a double-fault from Djokovic, who doubled over at his bench to catch his breath back as he looked spent after some brutal lengthy rallies. He was back on serve at 4-5 but was taken to a third set when Medvedev stole the second 7-6(5) before the physical issues started to set in for Djokovic, who could be seen violently shaking at his bench before pouring a bottle of water over himself as commentators called for him to retire and save himself for the semi-final but he decided to continue and even had a break point at 4-3 but failed to convert it.

The seventh seed was then dragged into a service game that lasted more than 15 minutes, ultimately getting broken before he managed to break straight back when the 2020 ATP Finals champion served for the match. The match went into a final set tiebreak and Djokovic got the first mini-break courtesy of a Medvedev error and he changed ends with a 5-1 lead when the Russian sent the ball long again. And Djokovic finally clinched victory 7-2 in the final set breaker after more than three hours to end the eek with a 3-0 undefeated record in the group stage.

Medvedev had been hoping to snap his losing streak and end the season on a high after crashing out in his first match at the recent Paris Masters before finding himself eliminated from the group stage at the ATP Finals when he lost his first two matches to Andrey Rublev and Stefanos Tsitsipas. But instead he ends 2022 on a four-match losing streak as Djokovic widened the gap in their head-to-head, now sitting on eight wins to four losses.

The 26-year-old enjoyed mixed results this season, starting the year by making the Australian Open final before he reached the world No 1 ranking in February, becoming the first non-Big Four player to sit atop the rankings in 18 years. But he suffered disappointing losses at the French Open and US Open as he failed to get past the fourth round, and ended the year with two titles from Los Cabos and Vienna.

Meanwhile, Djokovic will now be focused on recovering in time for tomorrow’s semi-final as he plays the first of the two matches during tomorrow’s day session against Fritz, who played his final group match on Thursday night and has an extra day to recover compared to the Serb. As well as struggling with fatigue, the world No 8 played his longest-ever match at the ATP Finals and has less than 24 hours before his semi-final.