Two-time grand slam champion Naomi Osaka advanced to the US Open final for the second time in her career with a 7-6 (7-1), 3-6, 6-3 victory over big-hitting Jennifer Brady on Friday (AEST).

Brady arrived at her first grand slam semi-final without having dropped a set in New York and did not show any nerves but Osaka's firepower allowed her to get by the American 28th seed in a high-quality match. 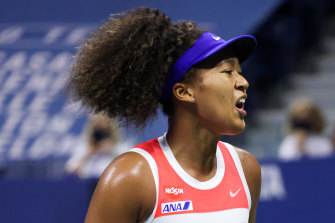 Naomi Osaka has reached the US Open final.Credit:Getty Images

Osaka's victory ended a splendid US Open run for Brady, whose previous best grand slam performances came in 2017 when she reached the fourth round in Melbourne and New York.

Up next for Osaka will be either third seed Serena Williams or former world No.1 Victoria Azarenka of Belarus.