London: World No.1 Novak Djokovic had enough on his plate already on Wednesday without marauding Russian Daniil Medvedev pummelling him to a shock 6-3, 6-3 defeat at the ATP Finals.

Shortly after news broke that Djokovic had been nominated for a return to the ATP player council he had quit in August, he took to court at the O2 Arena hoping to seal his passage into the semi-finals of the prestigious year-ender. 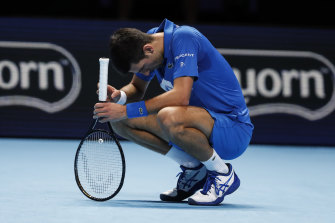 Novak Djokovic was soundly beaten by Daniil Medvedev at the ATP Finals.Credit:AP

Djokovic, who was president of the player council, was obliged to resign despite saying the PTPA was not a rival organisation and that it was set up to better protect the interests of the players.

"I do not see any conflict of any kind at being part of the PTPA and part of player council, I didn't then or now," he said on Wednesday.

On being nominated for the player council, which will be voted on in December, Djokovic said it showed that he had the "trust and credibility" of his fellow players.

"You have a responsibility when you are nominated," Djokovic said. "But the ATP board had a vote last night which means no active player can be part of the council and any other organisation in the tennis ecosystem."

It is the latest political twist in the running of the men's game which has seen Djokovic's proposed PTPA fail to muster the support of Roger Federer and Rafael Nadal, both of whom, along with Andy Murray, are on the ATP player council.

Medvedev's sensational performance means he is guaranteed top spot in the group and Djokovic, bidding to match Federer by winning the title for a record-equalling sixth time, must beat 2018 champion Alexander Zverev in his last round-robin match on Friday.

Medvedev, who made only 12 unforced errors, lost all three of his group matches on his ATP Finals debut in London last year, but now looks like a genuine title contender.

"I just had a pretty bad seven games in a row," Djokovic, who himself lost all three matches on his debut at the ATP's jewel in the crown in 2007 before taking the title in 2008, said. 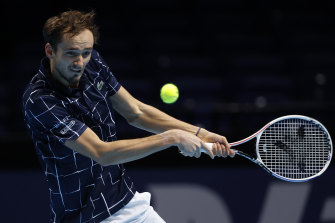 Daniil Medvedev has been mighty in London.Credit:Getty Images

"In no time it was 6-3, 3-0. He was just better, no question about it. I struggled to find the right rhythm for 15 minutes or so. I could have and should have done better, but credit to him for playing on a high level."

Medvedev did what Djokovic has done to countless opponents. Having absorbed the Serb's best early on, he broke serve in an extended game at 3-3 and then ran the legs off his increasingly dispirited and ragged opponent.

"I'm sure he didn't play his best but it happens to everybody," the world No.4, who warmed up for London by winning the Paris Masters, said.

"I always say the Big Three are champions because it happens to them less than everyone else. I'm feeling confident. I knew I had to take my chances and it was a great match for me."

While Medvedev will go into his final group match against Diego Schwartzman with no stress, Djokovic faces a straight shoot-out with Zverev to avoid an early exit.

Earlier Zverev bounced back from his defeat by Medvedev to beat Argentine debutant Schwartzman 6-3, 4-6, 6-3.