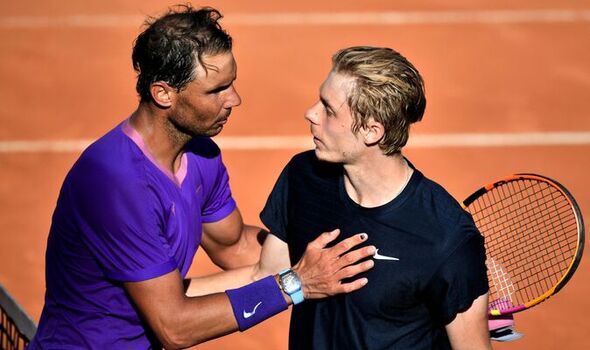 Rafael Nadal has admitted he was “super lucky” to save two match points and defeat Denis Shapovalov during last year’s Italian Open as he set up a rematch with the world No 16. Following his 6-3 6-1 victory over John Isner, the 10-time champion in Rome will now meet the world No 16 in the third-round for a second year in a row.

Nadal opened his quest for an 11th Rome Masters title with a straight-sets victory over Isner, dropping just four games in the 76-minute match. He now faces Shapovalov in the round-of-16, a rematch of their crazy three-set battle in the same round of the Italian Open last year.

The Spaniard saved two match points en route to a 3-6 6-4 7-6(3) win in their last meeting on the clay and went on to win the title in Rome. But looking ahead to their impending rematch, the world No 4 confessed it was “a joke” that he managed to win last year’s battle.

“Yeah well, last year was a joke, the match that I saved here against him. Super lucky,” he said. Looking ahead to their latest meeting, he added: “I know how dangerous he is, I need to play well of course, need to play better than today.”

JUST IN: Raducanu ‘needs someone to hold her hand’ after calling herself loner

Nadal is playing just the second tournament of his injury comeback after he was sidelined by a rib fracture picked up in Indian Wells, and the third seed was relishing the chance to test himself against Shapovalov with the French Open looming. “After a while without being on court it’s another victory and tomorrow again [is] a chance to play against one of the best players of the world, another good test,” he said after his 6-3 6-1 victory over Isner.

“Let’s see. I need to build again the things after a tough stop and that’s what I’m trying, just to stay with the right attitude and let’s see if I am able to make that happen.” The 21-time Major champion also admitted he would be back out on the practice court after his opening win, sounding unhappy with how he started the match against the big-serving American.

“Well I finished better than what I started without a doubt,” he said. “Beginning of the match I think was not good for me and even he had some chances on the return two break points and two not difficult balls and I was in hands at that moment, lucky that he missed that couple of shots.

“Then I was able to have the break and then the match changed of course with the first set and then having the break in the first game of the second, everything changed. I just focus on myself, just focus on try to keep going. I knew had to do things better than what I did and I’m going to practice to try to do it better and better.”