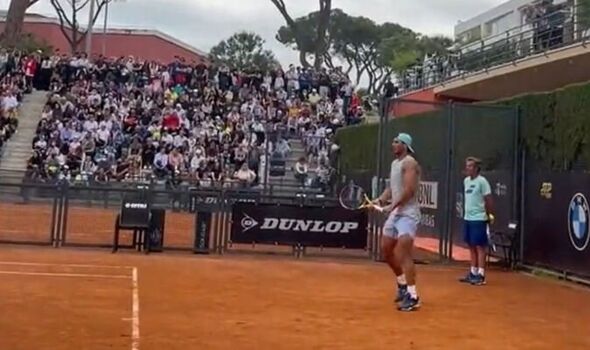 Rafael Nadal has already started practising in Rome ahead of the Italian Open just two days after suffering defeat to compatriot Carlos Alcaraz in Madrid. The final clay-court Masters 1000 of the season is the world No 4’s last chance to get some matches in and play himself back into form ahead of the French Open as he continues his return from a rib injury.

Nadal made his comeback in Madrid last week after fracturing his rib in Indian Wells and sitting on the sidelines for six weeks. He made it to the quarter-finals where he suffered his first defeat in three matches to his young countryman 6-2 1-6 6-3. And it seems the 35-year-old is wasting no time as he is already in Rome with two practice sessions lined up on Sunday.

The Italian Open is the last tournament the 13-time French Open champion will play before bidding for a record 14th title in Paris and 22nd Grand Slam overall. And it will be a crucial event for Nadal, who is fresh off the back of a six-week injury layoff and hoping to get some matches in before the most successful event of his career.

The world No 4 posted a photo of himself flying over the Caja Magica in Madrid en route to Italy on Saturday evening, as his conqueror Alcaraz was busy defeating world No 1 Novak Djokovic, and has already taken to the practice court in Rome. Nadal hit with Marc Lopez, who is fresh off the back of his retirement in Madrid, and will be back for another practice session with Andrey Rublev, who also lost in the quarters this week.

JUST IN: Madrid finalist is richer than Federer, Nadal and Djokovic combined

After losing to Alcaraz in a two hour and 28 minute battle, Nadal admitted his opponent deserved to win, saying: “Happy for Carlos. He was better in various aspects.” He also backed the 19-year-old to defeat Djokovic in the next round and go on to win the title, and has already been correct in his first prediction.

“Carlos can win perfectly. I don’t see any reason why he cannot win,” he said of the seventh seed’s first meeting with Djokovic, and later wrote on Instagram: “Congratulations to Carlos @carlitosalcarazz for the game. Good luck for the rest of the tournament!!! To win!”

Nadal’s attention is now already firmly with the Italian Open, where he is the defending champion. He faces either John Isner or a qualifier in his first round and has Djokovic in his half, so it could be a semi-final meeting between last year’s finalists after Nadal was denied a grudge match with his French Open conqueror when he lost to Alcaraz.

The 19-year-old will be safely away in the other half of the draw, meaning the only chance for Nadal and Alcaraz to face off for a fourth time will come in the final. Nadal will then head to Paris for the French Open, where he fell to Djokovic in the semi-final last year.