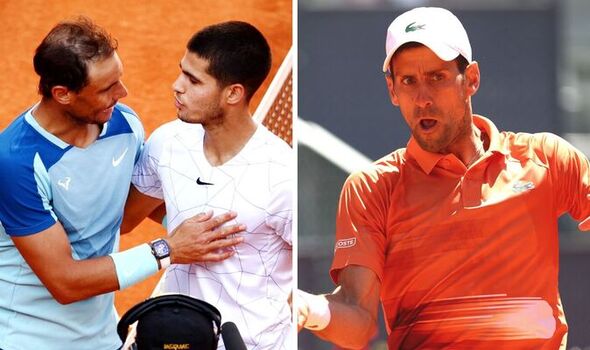 Rafael Nadal has backed Carlos Alcaraz to go on and win the Madrid Open after losing to the seventh seed in Friday’s quarter-final. The 19-year-old will need to endure his first meeting with world No 1 Novak Djokovic en route to a potential finals appearance but the five-time former champion says he doesn’t see why the teenager can’t win.

Alcaraz clinched his first career victory over his idol Nadal 6-2 1-6 6-3 on Friday to set up a meeting with another legend of the sport in Djokovic. While it took the world No 9 until his third try to defeat his compatriot, Nadal believes his conqueror has a good chance of beating the world No 1 in Saturday’s semi-final.

“Carlos can win perfectly. I don’t see any reason why he cannot win,” he claimed after the match, though he admitted his long-time rival Djokovic was a lot more prepared to face Alcaraz than he was. “It’s true that he cannot have the downside that he had on the second set today, but he plays with a lot of adrenaline.”

And the 21-time Grand Slam champion appeared to take his prediction even further in an Instagram post, telling him “to win”. Sharing a snap of himself with the King of Spain, who was in attendance at the all-Spanish showdown, as well as a photo from the court Nadal wrote: “Congratulations to Carlos @carlitosalcarazz for the game. Good luck for the rest of the tournament!!! To win!”

Nadal had also admitted that the 19-year-old was the better player in Friday’s clash, saying: “Happy for Carlos. He was better in various aspects.” The former world No 1 has previously sung Alcaraz’s praises and tipped him for huge success in the future, so it comes as no surprise that he believes the teenager can win in Madrid.

Ahead of their clash in Indian Wells, won by Nadal in three tight sets, he said: “Carlos is a great guy and he is a potential No 1 player and multi-Grand Slam winner without a doubt, no? So it’s great that in Spain we have a player like him.”

Alcaraz already has a Masters 1000 title under his belt, becoming the youngest man ever to win the Miami Open at the beginning of last month, and is on an eight-match winning streak after winning the Barcelona Open two weeks ago. He coincidentally lifted the trophy on April 24, exactly 17 years to the day that a then-18-year-old Nadal won his first Barcelona title in 2005.

The following day he broke the world’s top 10 for the first time, once again on the same date that Nadal achieved the same feat back in 2005, aged 18. Even Djokovic noted Alcaraz’s recent achievements at such a young age, something that has become unprecedented in the current era of tennis. “Nowadays we are not used to seeing somebody who is [a]teenager and already getting to the top 10 and playing such a high level,” he admitted ahead of their clash.

Decision to push ahead with Australian Open vindicated, says Tiley