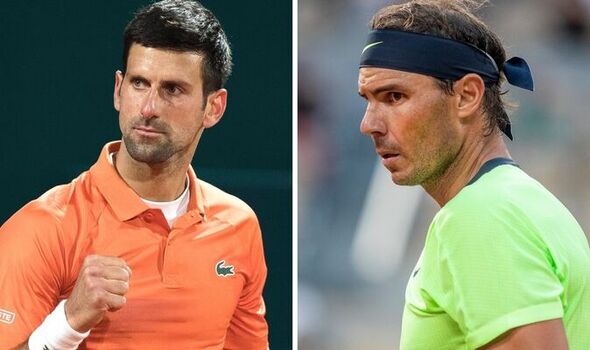 Novak Djokovic has been tipped to become a “scary” opponent in time for his French Open title defence, threatening Rafael Nadal’s chances of picking up a record 14th title in Paris. The world No 1 started the season slowly after being unable to compete over his unvaccinated status but recently made his first final of the year in Serbia and has shown “glimpses” of returning to his top form.

Djokovic suffered back-to-back losses for the first time since July 2021 in his first two tournaments of the season, crashing out in the Dubai quarter-finals in February before losing his opening match in Monte Carlo 47 days later. But the Serb recovered to reach the final in Belgrade, where Andrey Rublev defeated him 6-2 6-7(4) 6-0.

After his showing at the Serbia Open, world No 153 Christopher Eubanks said the world No 1’s progress at the tournament showed he could get back to his top level just in time for his upcoming French Open title defence. “It seems to me that he is slowly getting in shape, and the best indicator is the final against Rublev,” the American claimed on Tennis Channel’s Inside-In podcast.

“It seems to me that he played better and better from match to match and that this is a positive signal in front of Roland Garros. If he continues like this, he will really be a beast in Paris. Then everyone will be afraid of him, it will be the real Novak.” The 25-year-old also explained how the 20-time Grand Slam champion’s matches earlier in the week gave an indication that he would return to being a “scary” opponent in the coming weeks.

JUST IN: Swiatek calls for unity over Russia ban to avoid Wimbledon ‘chaos’

He added: “We’re seeing a glimpse. I think in the first match, he just had to kind of find a way, just give himself another chance to just keep going. That was against Laslo Djere, then against Kecmanovic, we started to see more glimpses. I think Kecmanovic won the first set, Novak, again when his back is against the wall, he produces some of his best tennis and then there were points, probably 5 or 10 instances in that match when we said ‘That’s Novak!’

“I think Novak is finding his form and if he continues this, he’s going to be really, really scary in the next few weeks.” Crediting Djokovic for his stunning 2021 season – which saw the Serb win the first three Grand Slam tournaments of the year to tie the then-record of 20 Major titles with Nadal and Djokovic before making the US Open final – Eubanks admitted it was tough for the world No 1 to regain that form after a slow start to the year.

“I’m starting to see the sparks of the Novak of last year because Novak’s last year was incredible,” he said. “Novak’s year last year was one of the greatest years a tennis player has ever put together, one match short of a Calendar Slam, it’s absolutely incredible. But, like you said, the way the year started off, with the way that year started off, he hasn’t been playing many matches, just practising. It’s very, very tough to replicate match-play situations in practice.”

But the American pro also thought Djokovic wasn’t currently at his physical peak, something that would come after more matches in Madrid and Rome. “Novak Djokovic did not play well in Monte Carlo at all, suffering a sudden collapse in the third set of the match against Alejandro Davidovich Fokina,” he admitted.

“He is not yet at the top from a physical point of view, as evidenced by the 6-0 scored by Andrey Rublev in the third set of the final. Madrid and Rome will serve him to further improve in view of Paris. I don’t think his game is a problem, it’s just a consequence. When he returns to 100% from a physical and mental point of view, everything will come automatically on the court.”