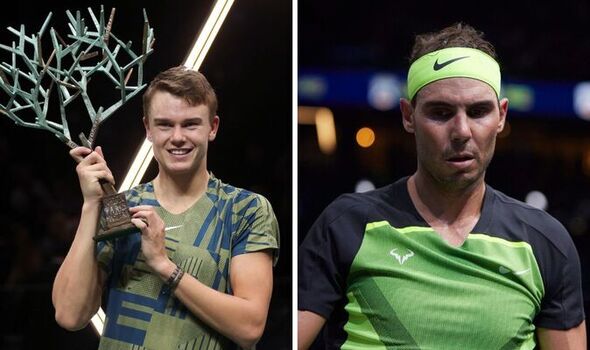 Holger Rune has overtaken Rafael Nadal in the list of wins over top 10 players this season following his run to the Paris Masters title. The 19-year-old made history as he became the first man on record to beat five top 10 players at the same tournament outside of the top-eight ATP Finals, and has now tied Carlos Alcaraz for the joint-most top 10 wins this season with nine.

Rune enjoyed the best week of his young career in Paris-Bercy as he went on a remarkable run to win his maiden Masters 1000 crowd. After finding himself facing three match points in his opening match against three-time Major champion Stan Wawrinka, he defeated Hubert Hurkacz, Andrey Rublev, Carlos Alcaraz and Felix Auger-Aliassime to reach the final.

He then came from a set down to stun reigning champion Novak Djokovic 3-6 6-3 7-5, earning his fifth win over a top 10 player for the week and being rewarded with a place of his own in the top 10 after lifting the trophy. The Dane has now tied fellow teenager Alcaraz to hold the most top 10 wins of the season, overtaking Nadal.

The world No 2 has beaten seven top 10 players this year and suffered just one loss to players in the elite group of the rankings, while Rune more than doubled his previous tally of four top 10 wins as he finished his week in Paris with nine, the same as Alcaraz. The 19-year-olds also have the same number of losses against top 10 opponents with five each.

JUST IN: Jack Draper screwed over by Holger Rune’s Next Gen withdrawal

At the start of the season, Rune stunned Alexander Zverev in the second round of the Munich Championships before winning his maiden title later that week and he backed up his success on clay by upsetting Stefanos Tsitsipas at the French Open 12 months after the Greek star reached the final in Paris.

He then beat Jannik Sinner en route to the Sofia Open final, losing to Marc-Andrea Husler, and defeated Tsitsipas for a second time in last month’s Stockholm Open final for his second title. It has been an impressive breakout season for Rune, whose year went under the radar in comparison to fellow teen Alcaraz until this past week, with the Spaniard overshadowing his achievements by winning the US Open and reaching world No 1.

But Rune’s growth has been even more rapid than the Spaniard’s, with the three-time title winner starting the year ranked at world No 103 before reaching the top 10 while Alcaraz started the season at No 32 before becoming the youngest world No 1 in ATP history.

The new champion in Paris-Bercy admitted that his win over Djokovic was the highlight of his five top 10 victories, explaining: “To be able to beat him in such occasion, as I said, in the final is probably the most, you know, the best feeling of this whole week.”