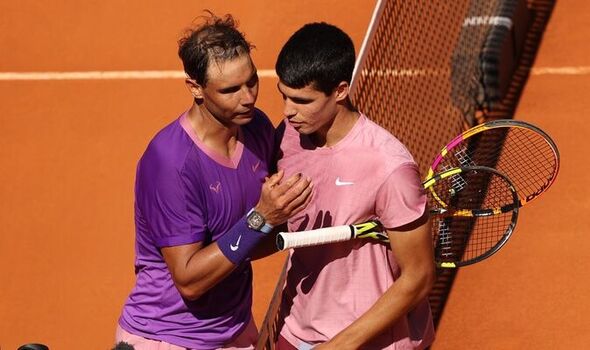 Almost one year to the day, Rafael Nadal and Carlos Alcaraz Garfia are set to clash on the Madrid Open clay in a highly-anticipated rematch. And Nadal must expect a completely different challenge from the ATP Tour rookie he faced and cruised past in the 2021 tournament.

After entering as a wildcard, Alcaraz was coming in off the back of his maiden win in a Masters 1000 event, defeating Adrian Mannarino 6-4 6-0 in the first round. It set up a dream match against Nadal, world number two at the time, and he soon received a brutal reality check.

The Spanish icon dominated Alcaraz, only 18 at the time, in a quick 6-1 6-2 triumph in their homeland’s capital. But the only way has been up for the latter ever since, and he entered this year’s Madrid Open as a Masters champion and top-10 player.

He has won four career titles in total, three coming this season, but the highlight of the bunch was his success at the Miami Open, a Masters 1000 showcase like in Madrid. Alcaraz has shot up to world number nine and will face Nadal in their third career meeting on Friday.

Nadal also came out on top in their second-ever meeting at this season’s Indian Wells Masters, although the 6-4 4-6 6-3 scoreline suggests he’s in for another more hard-fought battle than what he experienced 12 months ago. And Alcaraz believes it’s going to be a different story to his Masters 1000 debut.

However, the teenager admitted he ‘doesn’t know’ how he will beat his idol but believes he has a chance to topple him: “Honestly, I don’t know. I always say that he has 1,000 lives. He dies and he survives, in every tough match for him,” Alcaraz explained. “I think if I play a pretty good game, I’ll have chances to win.”

Nadal, 35, is almost double the age of the 19-year-old and could view him as the next face of Spanish tennis. There would be no better way for Alvaraz to make a name for himself than beating the 21-time Grand Slam champion in front of their home crowd.

Want the latest Premier League news as we publish it on Express Sport? Join our brand new Facebook group by clicking here.