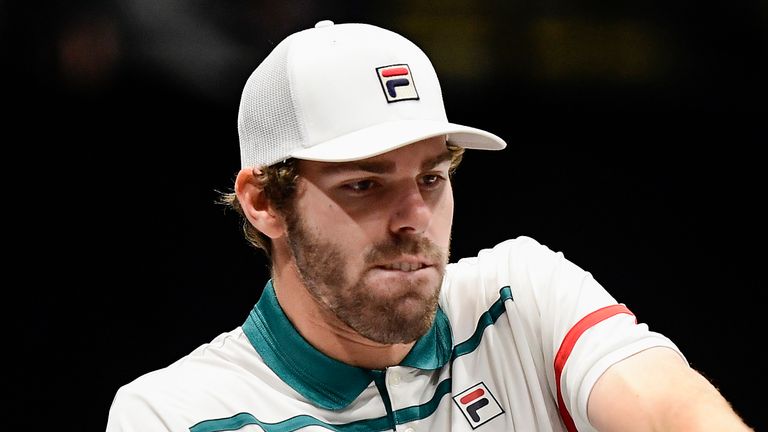 The fourth-seeded Opelka clinched victory in style, pounding his 27th ace of the match down the centre line for a 7-5 6-7(4) 6-2 triumph.

“I’m just really proud of the way I fought in the third set,” Opelka said. “I got an early break and I broke again. Physically I was feeling pretty good. If he broke me and we had to play more tennis, I was fine.”

The King of Delray! ?

Opelka won the first set after crushing a forehand at 6-5 to earn his third set point. A cross-court backhand passing shot that Nishioka could not handle ended the set and sent Opelka, sprinting to his chair, smacking his chest in celebration.

Nishioka forced a tie-break in the second, which he won when Opelka sent a ground-stroke long.

But the Japanese player double faulted in the first game of the third set to give Opelka the break and the 22-year-old American finished off the match with his big ace.

“It’s very tough to break his service games,” Nishioka said. “In the third set a little bit I lost my mind and maybe he saw it, he came out and tried to be a little bit aggressive. It worked. That was key in this game.”

Opelka had surprised Canada’s second-seeded Milos Raonic 4-6 7-6(6) 6-3 in their rain-delayed semi-final earlier on Sunday to set up the meeting with the rested Nishioka.

Nishioka had beaten France’s Ugo Humbert 1-6 6-4 6-0 on Saturday before rain washed out other matches at the Florida tournament.

Opelka’s only other title came a year ago in the New York Open.

The doubles crown was won by Mike Bryan and Bob Bryan as they beat Luke Bambridge and Ben McLachlan 3-6 7-5 (10-5).

It was Garin’s second title this year after winning the Cordoba Open in Argentina earlier in February. The 25th-ranked Chilean is projected to make the top 20 when the updated rankings are published Monday.

“The truth is that I am very happy,” said Garin.

“It was an incredible week. It was a week that I can’t even describe it. It was very good in all aspects.

“The first round took a toll on me. To stay the whole day yesterday at the club here, to sleep 4 or 5 hours, to wake up very nervous to play a game that was postponed and it ends up being one of the best weeks of my life. It means a lot to me winning here.”

With this win, @Garin_Cris will break the Top 20 in the @FedEx ATP Rankings for the first time in his career ?#RioOpen pic.twitter.com/7eJXLE4lhp

Despite breaking in the first game of the match, Garin struggled at times against Mager, who beat top-seeded Dominic Thiem in the quarter-finals.

Mager had reached the final after conceding only one set in the entire tournament. Hours before the decider he faced a tough challenge in the semi-finals against Hungary’s Attila Balazs.

Both semi-finals were finished Sunday afternoon after rain halted play shortly after midnight when Garin and Mager had already won the first set.

Marcel Granollers and Horacio Zeballos ran out doubles winners after their 6-4 5-7 (10-7) victory over Federico Gaio and Salvatore Caruso.

Emma Raducanu’s US Open defence should be approached with perspective